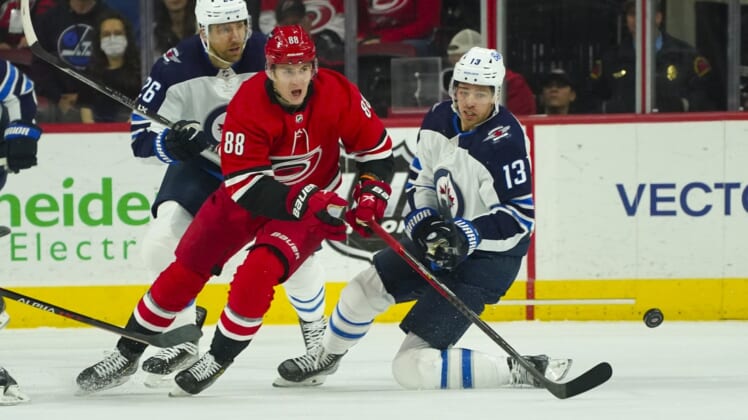 Rookie Seth Jarvis scored the go-ahead goal against his hometown team with 11:39 to play in the third period as the Carolina Hurricanes defeated the visiting Winnipeg Jets 4-2 on Thursday night at Raleigh, N.C.

Jaccob Slavin, Jarvis and Jordan Staal, with an empty-net goal, all scored in the third period to help Carolina complete a come back from a 2-0 deficit.

The Jets are changing the look of the Metropolitan Division this week. They lost 3-0 Tuesday night on the road against the New York Rangers, who began the week tied with Carolina (50-20-8, 108 points) and need to beat the New York Islanders in a road game that would finish later Thursday to stay even.

The Jets (35-32-11, 81 points) finished a six-game road trip with four straight losses to teams that have already qualified for the playoffs.

Connor opened the scoring with his team-leading 44th goal just 7:10 into the game. Dubois assisted on the goal, skating behind the net and sending a pass to Connor, who was waiting in front of the net.

With 1:05 remaining in the opening period, Dubois posted his 27th goal of the season. His shot from the left side went through the legs of Carolina defenseman Brett Pesce.

Teravainen broke through for the Hurricanes on a 4-on-3 power play with 30 seconds left in the second period. The goal came on the team’s 33rd shot on net. Sebastian Aho’s assist gave him 42 for the season, breaking a tie with Teravainen in that category for the team lead before Teravainen pulled even with an assist on Jarvis’ goal.

Teravainen became the fifth Hurricane this season to reach the 20-goal mark, something that hasn’t happened for Carolina in 15 years.

Carolina held a 34-17 edge in shots through two periods.

Staal, the captain, was back on the ice after a one-game absence stemming from a hit he absorbed Saturday night at Colorado.

The Jets were trying to earn a split of the season series with Carolina, but were unable to avenge a 4-2 loss in December at home.