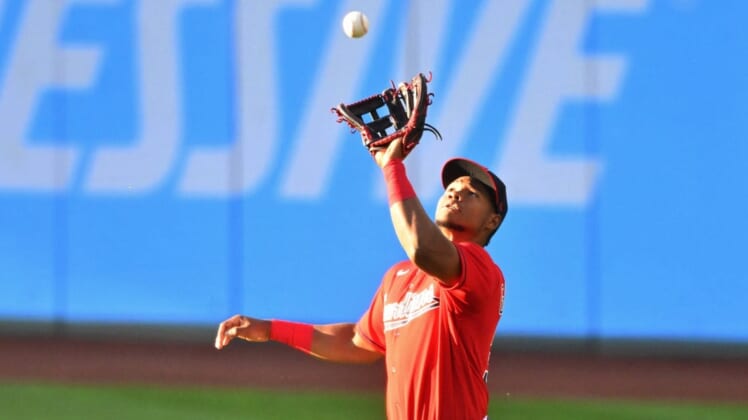 Andres Jimenez’s RBI single sparked a four-run uprising in the eighth inning as the Cleveland Guardians defeated the visiting Oakland A’s 8-4 on Thursday.

Jimenez’s jam shot to left field drove in pinch-runner Oscar Mercado to snap a 4-4 tie. Mercado ran for rookie Oscar Gonzalez, who was 4-for-4 and had crashed into the wall in right field in the top of the inning.

The Guardians have won eight of their last 10 games while the A’s have dropped nine in a row.

Guardians starter Konnor Pilkington pitched 5 2/3 innings before being replaced in the sixth. Pinch-hitter Seth Brown greeted reliever Bryan Shaw with a screaming double over the head of center fielder Myles Straw to drive in two runs to a take a 4-2 advantage.

The Guardians narrowed their deficit to 4-3 in the bottom of the sixth, but lost their manager in the process.

Steven Kwan singled and stole second base. The throw from catcher Sean Murphy sailed into center field, and Elvis Andrus tumbled onto Kwan at second, preventing him from advancing to third.

Terry Francona argued that Kwan should have been awarded third, and was ejected for the first time this season. He was replaced by DeMarlo Hale.

Gonzalez followed with a single to right to drive in Kwan.

Cleveland tied the score at 4-4 in the seventh when Kwan’s two-out single drove in Luke Maile from second.

Christian Bethancourt, who was 3-for-4, pounded a two-run homer in the second. The 378-foot blast was his second of the season and handed Oakland a 2-0 lead.

The Guardians got back-to-back solo home runs from Jose Ramirez and Josh Naylor to tie the score at 2-2 in the fourth.