Russell Henley, Talor Gooch, Marc Leishman of Australia and Luke List shared the lead at the Houston Open when the first round was suspended due to darkness Thursday.

List was 5 under par through 15 holes, while the other three had completed rounds of 5-under 65. Jason Dufner sat one back at 4-under 66.

A rain delay of 2 1/2 hours Thursday morning pushed back the schedule for the day. Sixty-six players will need to finish their first rounds Friday morning.

Just before the suspension of play, List holed out for eagle at the par-4 14th hole from 179 yards out to join the leaders at 5 under.

“We knew we weren’t going to finish so just trying to get as much as we could in,” List said. “The course was gettable today, a little softer conditions from the rain this morning.” 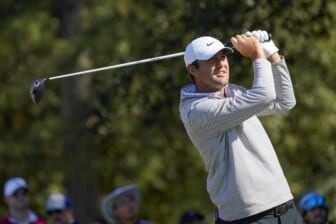 Leishman, the highest-ranked player of the quartet at No. 35 in the world, nearly finished his round alone at 6 under but committed his only bogey of the day at the par-4 18th. He made six birdies and ranked fifth on the day in strokes gained: approach.

“Got off to a good start,” Leishman said. “That first hole’s a brute of a hole and to make a long putt for birdie there was a nice way to start the day. … My irons were really on and gave myself a lot of chances and made the putts. It was pretty stress-free.”

Leishman, 38, already has two top-10 finishes since the new season began in September.

Henley won the Houston Open in 2017 and could become the first multiple winner of the event since Vijay Singh back in 2005. On the back nine, Henley made birdie putts of 19, 15 and 15 feet.

“I lived in Charleston for seven years and we played bermuda grass just like here in Houston and a lot of wind in Charleston,” Henley said. “So I guess just kind of felt comfortable with playing in the wind and the bermuda grass.”

Gooch, in search of his first career PGA Tour title, responded to consecutive bogeys at Nos. 12 and 13 with three straight birdies at Nos. 15-17.

“At the end of the day with how I was hitting it today, it was just a matter of how many putts I was going to get to drop and I happened to make, you know, three in a row, so that’s always nice, always helpful,” Gooch said.

Six players were tied for 6 at 3 under, but just two of them, Keith Mitchell and Canada’s Ben Silverman, had finished their rounds.