Three Utah Jazz players and one Indiana Pacers player were fined by the NBA on Friday for their roles in an on-court altercation during the team’s game at Salt Lake City a night earlier.

All four players were ejected from Thursday’s game as the result of a fracas that began late in the fourth quarter.

Gobert already had one technical foul on the night when he pulled at Turner’s shorts after Turner got away with hitting Gobert behind the basket. Turner hit Gobert again from behind before they began grappling. 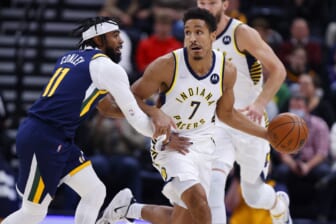 Ingles made “inappropriate contact with a game official during an on-court altercation,” the NBA said in a news release. Mitchell was said to have verbally taunted an opponent in order to escalate the fight.