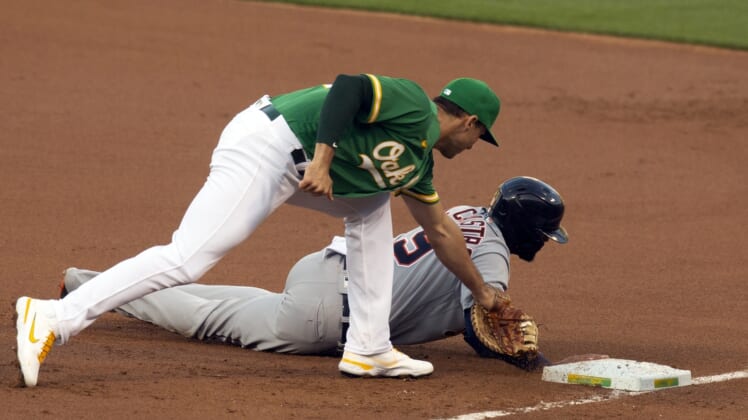 Matt Chapman hit his team-leading third home run of the season and four Oakland pitchers combined to strike out 11 in a four-hitter Friday night as the Athletics made it two straight over the visiting Detroit Tigers with a 3-0 victory.

Right-hander Jose Urena (0-3) was the hard-luck loser for the Tigers, who entered the four-game set riding a three-game winning streak.

Each starting pitcher had allowed just one hit until a one-out walk to Ramon Laureano in the bottom of the fourth set up Oakland’s first two runs.

Matt Olson followed with a single, and one out later, Mitch Moreland singled in one run. Sean Murphy then doubled in another run.

Chapman’s homer, a solo shot, came off Tigers reliever Derek Holland with one out in the eighth.

Montas allowed just a two-out infield single to Robbie Grossman in the third and a leadoff single to Victor Reyes in the sixth in his six innings. He walked one and struck out seven.

Yusmeiro Petit served up one hit in a scoreless seventh, Jake Diekman struck out the side in a perfect eighth and Lou Trivino worked around an inning-opening single by Wilson Ramos in the ninth to complete the shutout.

Trivino was credited with his second save.

Olson, Moreland and Jed Lowrie all had two hits for Oakland, which out-hit the visitors 8-4. Lowrie had one of the game’s three extra-base hits, a double, while raising his average to .360.

Willi Castro got on base twice via a single and the only walk drawn by the Tigers, who were shut out for the first time this season.