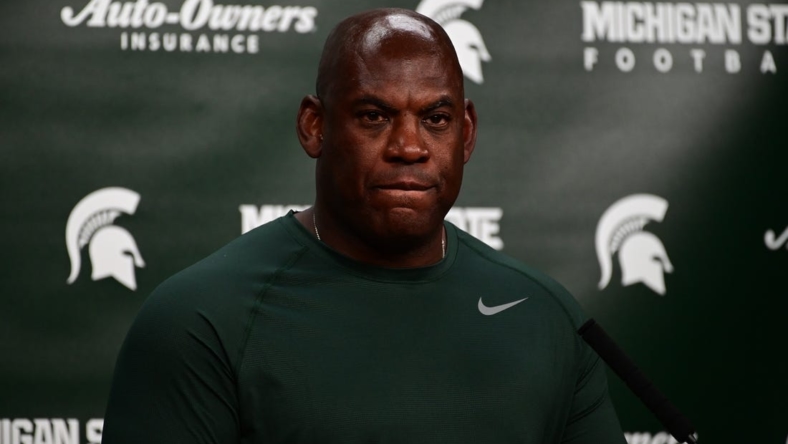 Michigan State suspended an additional four players Tuesday in the wake of Saturday night’s altercation in the tunnel of Michigan Stadium.

A joint statement from Michigan State coach Mel Tucker and athletic director Alan Haller said the new suspensions were a result of the program’s continued to efforts to “gather and review electronic evidence” of what Michigan coach Jim Harbaugh described as an assault.

“We are transparently working with law enforcement and the Big Ten Conference to evaluate additional facts and evidence surrounding the events in Ann Arbor,” the joint statement said in part. “We will continue to take appropriate action in this matter as we learn more. The student-athlete suspensions will remain in place until the investigations are completed.”

Brown, Grose, Crump and Young were seen on video hitting and kicking Wolverines defensive back Ja’Den McBurrows and swinging a helmet at defensive back Gemon Green.

A police investigation into the case is continuing and could result in criminal charges. Michigan coach Jim Harbaugh said Monday he expected charges to be filed.

“We’re not here to make any excuses for the behaviors Saturday,” Tucker said Monday in his weekly news conference. “They are unacceptable. It’s also very important to say we honor the traditions of the Big Ten conference, including the Michigan State-Michigan rivalry game, and we have a responsibility to uphold the values of this great university.”

Green hired an attorney, Tom Mars, who has said the Spartans players will “feel the full wrath of the law.” Green reportedly sustained facial injuries and a concussion.