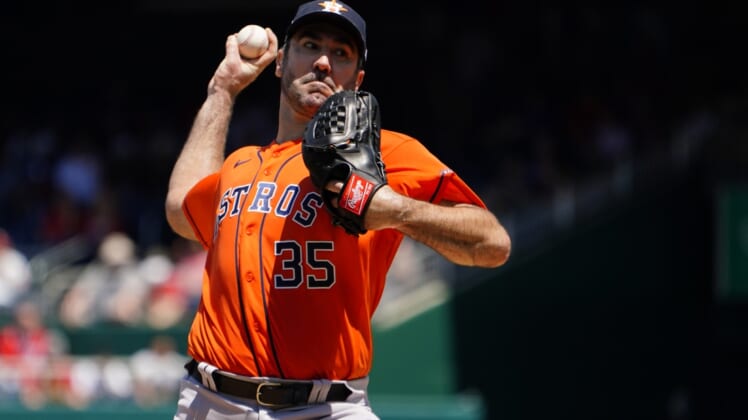 Justin Verlander threw five shutout innings and the Houston Astros homered in three consecutive innings to bash the host Washington Nationals 8-0 on Sunday afternoon in the rubber game of a three-game series.

It was a strong bounce-back outing for the Astros, who a night earlier had an 11-game winning streak snapped with a 13-6 loss.

Verlander (5-1) used 107 pitches and gave up two hits to combine with three relievers on a four-hitter. Rafael Montero, Ryne Stanek and Bryan Abreu all worked in relief behind Verlander.

The scoring began on Maldonado’s two-run shot in the fifth. Gurriel homered in the sixth with a solo blast and McCormick added a two-run homer in the seventh. Houston benefited from walks, as the players aboard in the fifth and seventh reached on free passes.

The Astros plated four runs in the seventh. Altuve finished the scoring with his homer to lead off the ninth. Gurriel and Altuve both homered twice in the series.

Gurriel had three hits for the second game in a row. Aledmys Diaz, Altuve and Maldonado each added two of Houston’s 11 total hits.

Washington had four singles and four walks, leaving seven runners on base while another was erased on a double play. The Nationals went 0-for-5 with runners in scoring position.

Houston is 5-1 on a nine-game road trip that is slated to continue in Boston on Monday.

Washington, which has been blanked three times this season, has lost five of its last seven games.