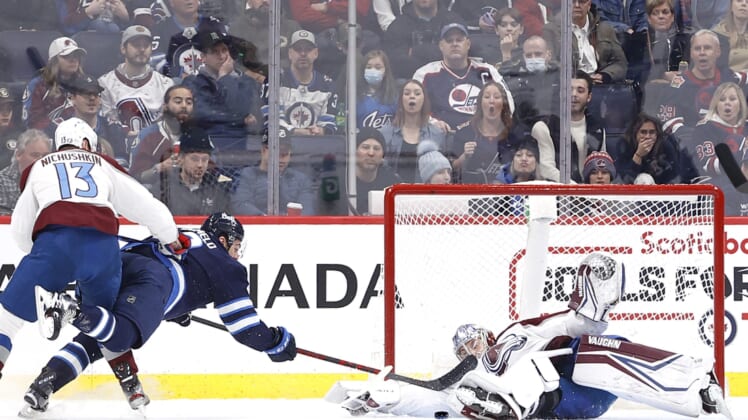 Adam Lowry and Blake Wheeler scored just over a minute apart to spark the host Winnipeg Jets to a four-goal third-period and a 4-1 comeback victory over the slumping Colorado Avalanche on Sunday.

Kyle Connor and Nikolaj Ehlers also scored for the Jets (36-32-11, 83 points), who snapped a four-game skid. Goaltender Connor Hellebuyck made 30 saves as he set a franchise record for games played by a netminder (380).

J.T. Compher replied for the Avalanche (55-18-6, 116 points), who have already claimed the Western Conference’s regular-season title but have lost four straight games for the first time this season. Goalie Darcy Kuemper stopped 40 shots.

Despite the Jets outplaying the Avalanche by a wide margin from the drop of the puck, Compher opened the scoring at the 5:03 mark of the third period with his 17th goal of the season. While the defenders were focused on him, Erik Johnson slipped a pass to Compher for a partial breakaway, and he snapped a forehand shot into the net.

However, the Jets notched a pair of goals 79 seconds apart to take a well-deserved lead and vault to victory. Lowry replied at 9:04 of the frame with a deflection tally after a face-off and drew the puck back to Josh Morrissey at the point for his 13th of the season.

Then, Wheeler tallied his 14th of the year to give the Jets the lead. Dylan Samberg’s point shot bounced off a defender and then ricocheted off Wheeler and into the net.

The Jets didn’t stop there. Connor notched his 45th of the season — the most by a Jets player since the team relocated from Atlanta for the 2011-12 season — when Jansen Harkins stole the puck at the Colorado blue line and fed him a pass. Connor took his time to find a space before depositing the puck with 7:35 remaining in regulation.

Ehlers rounded out the scoring four minutes later by blasting a shot from the left face-off dot after a Paul Stastny face-off win for his 27th of the season.