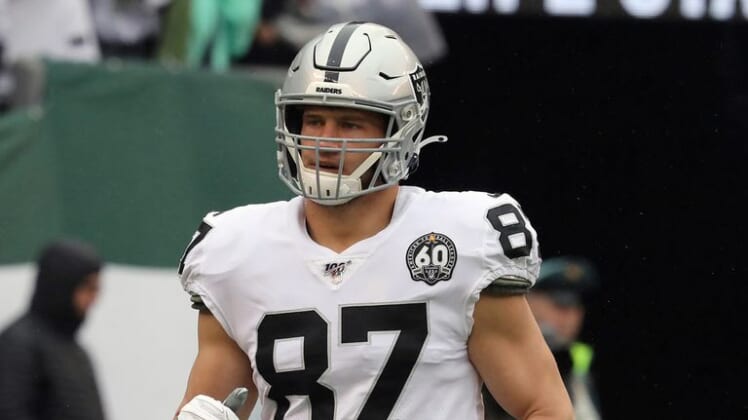 After his first season started promising and then ended with an injury, Foster Moreau is feeling healthy, ready, and likes what he sees out of his Raiders teammates.

For Foster Moreau Raiders training camp couldn’t come fast enough. Rehabbing a knee injury during a worldwide pandemic wasn’t the easiest thing for the LSU product. He showed flashes of brilliance until the injury sidelined him after the Tennessee Titans game in December of last year.

Moreau’ Raiders career so far consists of playing in 13 games, scoring five touchdowns on 21 receptions for 174 yards. He was getting a feel for the pro game and then it ended with an injury.

For NFL players rehabbing, and missing game time, at least they have their teammates to help motivate them as they do the work. But due to COVID-19 and the restrictions put in place by the NFL, Moreau had to go it alone for a while.

“I won’t lie to you, it was difficult,” Moreau told the media at a Monday morning press conference held virtually from the Raiders training camp in Henderson. “But it puts you in a difficult situation where the guidance isn’t really there every day. It’s not an everyday routine kind of thing, and that’s kind of what athletes and successful people thrive off of, is to be able to monitor and veer their routine to kind of cater it to the things that they need to do to be successful day in and day out.”

Despite the solitary nature of his rehab during this unusual time, Moreau still kept on track knowing the only way to get back on the field was to put in the hard work to get healthy.

“I mean, spent a lot of hours alone doing it myself, self-monitoring how my recovery is supposed to go,” Moreau said. “And right now, we’re feeling great. There was a lot of work that was put into this. I can’t thank the training staff here enough.”

When it comes to the outlook for his second season in the NFL, Moreau said it was really simple for him in theory but hard work was the only way to forge ahead and be successful. It’s those habits and routines developed last year he believes mean his second season will be even better.

“I think in my rookie year, I developed a really good routine,” Moreau said. “A really good routine every day that I kind of learned to follow and do a great job of understanding where I needed to allocate my time during the week in order to be successful on Sunday. I kind of carried that over and added some things into it. You learn to watch film better. You learn how to recover efficiently, you’re not just doing ice and stem just for the kicks of it, just because someone told you to go recover. You know exactly what you want to do during the week and I think that’s invaluable as a player, knowing where to put your time.”

Moreau’s Raiders training camp takeaways also have him pumped up to get back on the field. The influx of new, young talent on offense, coupled with returning veterans has him hopeful for a jump up in 2020.

““I think it’s gone really well, especially for the amount of time that we kind of lost in the spring, over the summer,” Moreau said. “I think we’ve really made great jumps, great leaps. Just done an exceptional job, especially at the rookie level. And kind of getting everyone acclimated to the speed at which we expect guys to learn. It’s kind of a difficult offense to wrap your head around, a lot of verbiage, but I think guys have done a really good job picking up on things and we are flying around the field.”