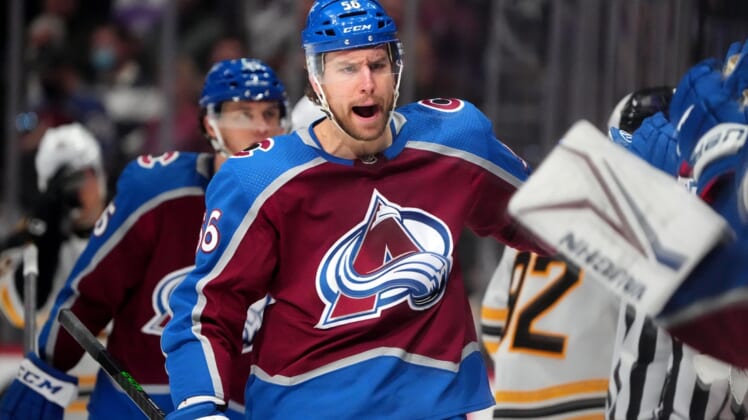 The NHL trade deadline has passed and teams know what they’re equipped with as pushes for the playoffs continue.

The Colorado Avalanche fortified their bottom six forwards with a couple of deadline deals Monday — in addition to acquiring two other players last week — and go into the stretch run deeper and bigger than a month ago.

With the dealing over, Colorado can concentrate on securing the No. 1 seed in the Western Conference and try to win the Presidents’ Trophy for the second straight season. The Avalanche begin the final five weeks of the season by hosting the Vancouver Canucks on Wednesday night in Denver.

After trading for Nico Sturm and Josh Manson last week, general manager Joe Sakic on Monday picked up forwards Artturi Lehkonen and Andrew Cogliano from Montreal and San Jose, respectively. Both arrived in Colorado on Tuesday, but Lehkonen won’t be able to play until his immigration paperwork clears.

Lehkonen goes from a Canadiens team that was out of the playoffs to a squad that leads the league in points. Lehkonen helped Montreal reach the Stanley Cup Finals last year and is eager to help the Avalanche get there this season.

“I’ll just try to bring my own style game, be good on both sides of the ice,” he said. “I’ll do whatever the team needs me to do.”

Colorado lost defenseman Ryan Murray to a fracture — of his arm or hand, the team didn’t specify — when he was hit with a shot in Monday’s win over Edmonton. Coach Jared Bednar said he will miss “weeks, not days” and Kurtis MacDermid will move from forward to defense.

The Canucks are likely out of the postseason hunt but weren’t big sellers at the trade deadline. They sent forward Tyler Motte to the New York Rangers for a 2023 fourth-round draft pick but held onto high-profile players J.T. Miller, Brock Boeser and Conor Garland.

Vancouver has had a turnaround under new coach Bruce Boudreau, but a slow start to the season and a just-finished 2-3-2 homestand might be too much to overcome. That has put the focus on the future, not the present.

“We felt that we picked up a younger (defenseman) in Travis (Dermott) and obviously at half of the salary from Hamonic there,” general manager Patrik Allvin said. “(We) can do both things here. But I also think that we’re looking in every way to improve our hockey club.”

Colorado has won four straight since losing back-to-back games in regulation for the first time since October. The Avalanche are trying to sweep the three-game series with the Canucks. They won 7-1 on Nov. 11 in Denver and 4-2 six days later in Vancouver.

The Avalanche hope to have captain Gabriel Landeskog back before the playoffs. Landeskog had knee surgery last week and Bednar said he is progressing well.