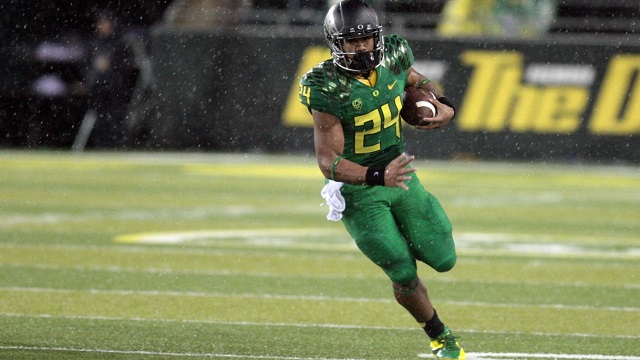 There was a time not too long ago that Thomas Tyner was among the best young running backs in college football. A five-star recruit out of Aloha High School in Oregon, Tyner chose the Ducks over a multitude of teams.

Tyner would go on to record 711 rushing yards and nine touchdowns while averaging a lofty 6.2 yards per rush as a freshman for Oregon back in 2013. Unfortunately, the next two seasons were cut short due to a shoulder injury. Ultimately, Tyner decided to retire from football.

Though, that retirement now appears to be short-lived. According to The Oregonian, Tyner has requested his release from Oregon and intends on suiting up for Oregon State this upcoming season.

“Tyner requested his release from the University of Oregon on Friday,’ the paper reported. “At 9 a.m. on Saturday morning, it became official and the former five-star running back who once rushed for 644 yards and scored 10 touchdowns in a single game for Aloha High School prepared to talk with Beavers coach Gary Andersen about playing for OSU next season.”

The Beavers have yet to confirm this, but Tyner pretty much indicates as much on Saturday.

“I feel 100 percent,” he said on Saturday. “I’ve had two years of being free, not doing any sports or anything. I think it’s time for me to get back. My football career didn’t end the way I wanted it to and I think I owe it to myself and everyone who looked up to me … I’ve wanted to be a Beaver my whole life.”

This is surely an interesting development for both Tyner and the Beavers. At 5-foot-11 and 215 pounds, Tyner has the frame to hold down the three-down duties for Oregon State. And if he’s 100 percent healthy, there’s no reason to believe he can’t dominate this upcoming season.

It will surely be interesting to watch heading into the 2017 college football season.