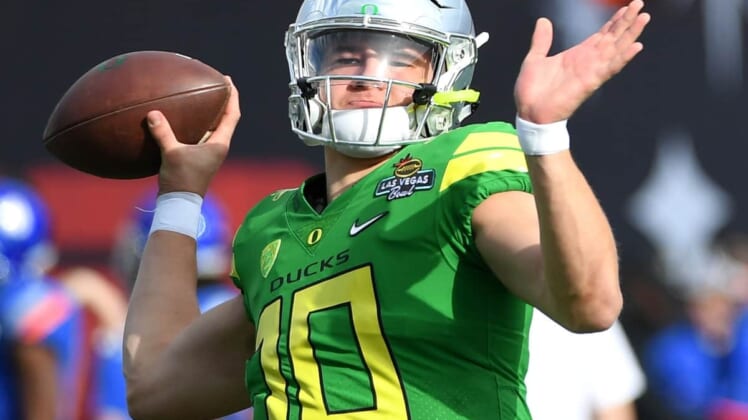 It’s widely assumed that Oregon quarterback Justin Herbert is going to leave school to declare for the 2019 NFL Draft after his junior season. Many people believe he has a great shot to be selected No. 1 overall, given his otherworldly talent and natural physical abilities.

However, during an interview with the John Canzano radio show on 102.9 The Game in Portland on Thursday, former Oregon quarterback and family friend Chris Miller said he thinks Herbert will stay in school for one more year.

“I’ve said this for probably the last couple years or so and I was talking to his mom, sat in front of me at the Oregon-Stanford game a couple weeks ago,” Miller said (h/t Duck Territory). If he were to come out or continue on the ascending path he is now, he’d be the first draft in the NFL draft. The first draft, pick maybe in the top five but he’s got tremendous talent, very cerebral kid, great kid. But I think he really enjoys the college experience and I think he probably is going to stay maybe another year or try to play with his brother Patrick.”

When asked to discuss this in a bit more detail, Miller added, “Yeah, I think you know my sense is I think he would like to. He enjoys the college experience.”

Miller also touched on the fact that Herbert has limited experience playing at the collegiate level, noting, “he needs that,” while once again noting the quarterback would probably love to play with his younger brother, Patrick.

If Herbert really did decide to stay in school one more year, it would really be a big move that would shake up the top of the draft.

So far in 2018, starting in five games for the Ducks, Herbert has put up jaw-dropping stats. He’s passed for 1,411 yards with 15 touchdowns and five interceptions, adding an additional score on the ground while leading Oregon to a 4-1 record.