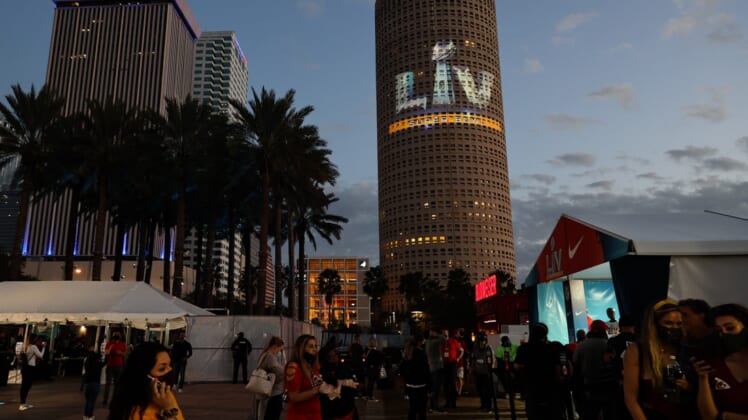 Feb 6, 2021; Tampa, Florida, USA; A general view of the Super Bowl LV logo projected on the Sykes tower in downtown Tampa prior to the game with the Tampa Bay Buccaneers playing against the Kansas City Chiefs. Mandatory Credit: Matthew Emmons-USA TODAY Sports

Jackson, 38, was found dead Monday in his room at the Homewood Suites in Brandon, Fla. A cause of death has not been released.

ESPN and TMZ Sports obtained a death report from the Hillsborough County Sheriff’s Office. The report noted that hotel staff entered the room on Saturday and Sunday but left after seeing Jackson slouched over on the couch and assuming he was asleep.

By Monday, after seeing Jackson in the same position, hotel staff called 911.

Both ESPN and TMZ noted that the death report mentioned Jackson having a history of alcohol use and smokeless tobacco use. The report said Jackson was not a known drug user.

Also Thursday, the New York Times first reported that Jackson’s family had donated his brain to Boston University’s CTU Center. Scientists will study Jackson’s brain for signs of chronic traumatic encephalopathy, which can be caused by repeated blows to the head.