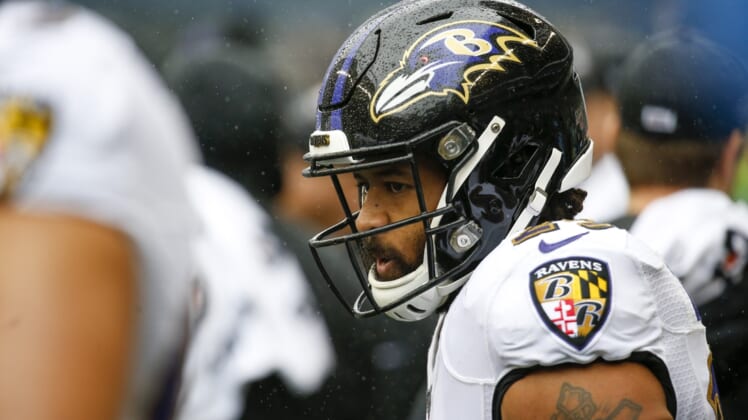 Former NFL safety Earl Thomas was arrested Friday on a felony charge in Texas for allegedly violating a court order and sending threatening messages to his estranged wife.

A warrant was issued on April 27 and Thomas was arrested in his hometown of Orange, Texas, according to Orange County Sheriff’s Office records obtained by independent NFL reporter Dov Kleiman.

Thomas allegedly violated a protective order two or more times within 12 months by sending threatening messages to a woman about her and her children. pic.twitter.com/tR4FMlKeLT

Thomas, 33, is charged with violating a protective order two or more times within 12 months, a third-degree felony.

That order, issued in May 2021, stated that he could only communicate with Nina Thomas through a co-parenting phone app.

According to earlier reports in the Austin American-Statesman, the woman told the police that Thomas recently began threatening her and her children through text messages. In one message, he allegedly told her he had two handguns; in another, he said he would “kick (her) ass.”

Thomas has not played in the NFL since the 2019 season. Last month, the seven-time Pro Bowl selection and three-time All-Pro told ESPN he wants to resume his NFL career.

Thomas recorded 713 tackles, 30 interceptions, 12 forced fumbles and six fumble recoveries in 140 career games (all starts) with the Seattle Seahawks (2010-18) and Baltimore Ravens (2019). He was selected by Seattle with the 14th overall pick of the 2010 NFL Draft.