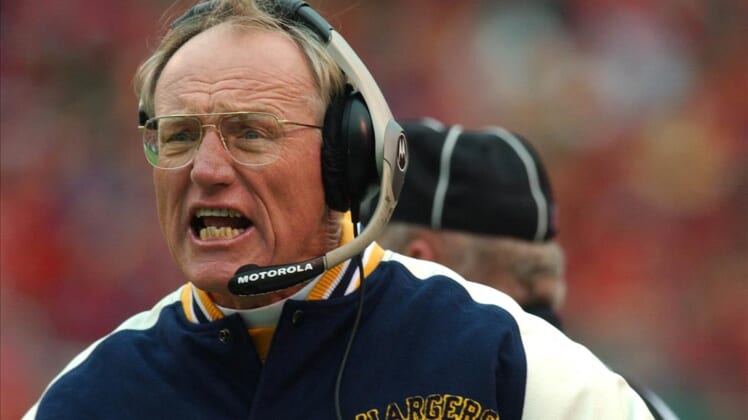 Marty Schottenheimer spent 21 seasons as a head coach in the NFL.

Schottenheimer, who was 77, was diagnosed in 2014 and entered hospice care near his home in Charlotte, N.C. last week.

He is survived by his wife, Pat, whom he married in 1968, their children Kristen and Brian and four grandchildren.

“We know he is looking down on us from heaven and smiling,” his daughter said in a statement from the family.

“We are so incredibly proud of the man he was and how he lived his life.”

He was named NFL Coach of the Year by the Associated Press in 2004 after guiding the Chargers to a 12-4 record and an AFC West division title.

Schottenheimer was inducted into the Kansas City Chiefs Hall of Fame in 2010.

His 200 wins rank eighth all-time in NFL history. Everyone above him on the list, except current Chiefs coach Andy Reid and New England Patriots coach Bill Belichick, has been inducted into the Pro Football Hall of Fame.

Schottenheimer came out of retirement in 2011 to serve as head coach and general manager of the Virginia Destroyers in the United Football League.