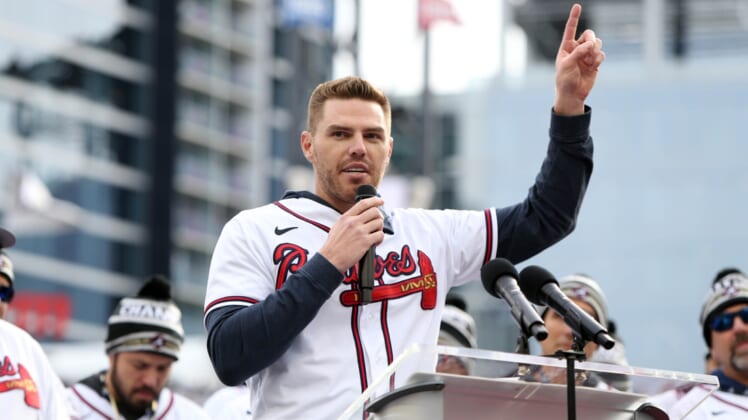 The 32-year-old Freeman is a free agent just months after helping the Braves win the World Series.

The acquisition of Olson ended any chance that Freeman, the 2020 National League MVP and five-time All-Star, would be sticking around in Atlanta. Freeman had been with the Braves since 2010.

“I don’t even know where to begin,” Freeman wrote on social media accounts. “For the past 15 years I got to be a part of your organization. It was truly an honor. We went through the very highs together and some lows but those lows is what made last year so special.

“You watched me grow up from a baby faced kid to marrying my love @chelseafreeman5 and seeing us bring 3 beautiful boys into this world. I’m so glad my family got to be a part of yours! To Snit, my coaches, teammates, training staff, clubhouse staff, and everyone who made Turner Field and Truist Park so special for my family and I over the years. Thank you from the bottom of my heart. It has been a blast to have you cheer for me and I hope I was able to bring smiles to a lot of your homes over the years.

“I gave everything I had day in and day out and I hope you guys saw that as well. Although our time has come to an end, I look forward to seeing and playing in front of you all again. When that time comes, I hope you remember all the wonderful memories we made together. I love you Braves Country! Champions Forever!”

Freeman’s suitors reportedly include the Los Angeles Dodgers and Boston Red Sox. The New York Yankees may be out of the mix after agreeing on a two-year deal to retain first baseman Anthony Rizzo earlier this week.

The Braves acquired Olson from the Oakland Athletics for four prospects.

Freeman led the NL in runs scored last season with 120. He has a career .295 batting average.