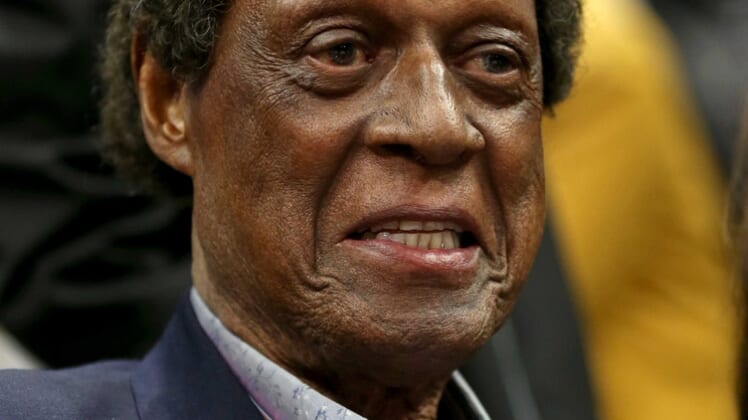 His wife, Elaine, and daughter, Krystal, were at his side when he passed away peacefully, the Lakers announced.

“Elgin was THE superstar of his era — his many accolades speak to that,” Lakers owner Jeanie Buss said in a team release. “He was one of the few Lakers players whose career spanned from Minneapolis to Los Angeles. But more importantly he was a man of great integrity, even serving his country as a U.S. Army reservist, often playing for the Lakers only during his weekend pass.

“… He will always be part of the Lakers legacy. On behalf of the entire Lakers family, I’d like to send my thoughts, prayers and condolences to Elaine and the Baylor family.”

He was inducted into the Hall of Fame in 1977 and the Lakers retired his No. 22 jersey in 1983. A statue honoring Baylor was unveiled outside Staples Center in 2018.

“I’m saddened beyond belief that he is gone,” Hall of Famer and current Clippers advisor Jerry West said in a statement about the passing of Baylor, his teammate on the Lakers for more than a decade. “I will forever cherish my days spent with him as a teammate. He was one of the most gifted and special players this game will ever see and he has never gotten his just due for what he accomplished on the court.

“My first few years in the league, he cared for me like a father would a son. He nurtured me and encouraged me like no one else had during that period of my life. We shared the joy of winning and the heartbreaking losses during the Finals. He was a prince both off and on the court. There are no words to describe how I feel at this time.”

Miami Heat President Pat Riley, who was Baylor’s teammate on the Lakers for two seasons before Baylor retired during the 1972 season, said in a statement: “Besides being one of the greatest players in the history of the game, Elgin Baylor was one of the classiest, most dignified men of integrity I have ever met. He will be missed.”

The Clippers issued a statement remembering Baylor as a “transcendent player, a beloved teammate and a pioneering executive,” and NBA commissioner Adam Silver said Baylor “set the course for the modern NBA as one of the league’s first superstar players.”

“In addition to his legendary playing career, Elgin was a man of principle,” Silver continued. “He was a leading activist during the height of the civil rights movement in the 1950s and 1960s and an influential voice among his fellow players. … Elgin will be deeply missed.”

The Clippers mourn the loss of Elgin Baylor, a transcendent player, a beloved teammate, and a pioneering executive. pic.twitter.com/xVLS5FmsGm

Following his retirement, Baylor coached the New Orleans Jazz from 1976-79 and then spent two decades as general manager of the Los Angeles Clippers.

“Elgin was the love of my life and my best friend,” Elaine Baylor said in a statement released by the Lakers. “And like everyone else, I was in awe of his immense courage, dignity and the time he gave to all fans. At this time we ask that I and our family be allowed to mourn his passing in privacy.”