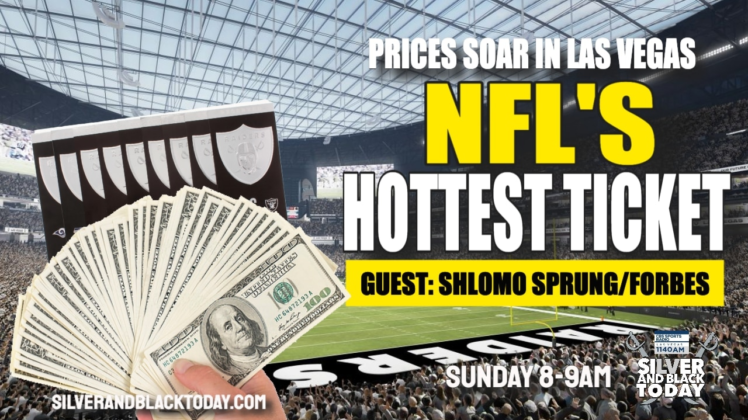 We’re in the midst of summer hours at the Silver and Black Today on CBS sports Radio 1140 and we discuss the hottest ticket in the NFL: the Las Vegas Raiders. What driving Raiders ticket prices and will they come down in 2020? Plus: the NFL has a radical proposal for handling its minority hiring issue. Does it have a chance?

There was much gnashing of teeth in Raider Nation over reports of sky-high Raiders ticket prices on the secondary market for the team’s first season as in Las Vegas.

We talked Forbes.com writers Shlomo Sprung who will give us the latest.

Raiders ticket prices were not the only story of the week…we also talk about the Raiders preseason schedule released late this week. We’ll also cover the latest roster news and Just Pod Baby‘s Evan Groat guest co-hosts with us and tells us about his interview with Isaiah Johnson and more.

The NFL’s radical proposal to even the playing field for minority candidates for head coach and general manager was met with skepticism this week. We discuss the proposal, what it means, and ask: how would it solve the problem?

In addition to our podcast episodes, don’t forget to catch the Silver and Black Today radio show which airs every Sunday from 8am-10am in Las Vegas. ALSO: Listen to our Tuesday night show, Silver and Black Tonight, Tuesdays 6-7pm (From Aug-Feb). Both can also be streamed live nationwide on the Radio.com app.

We asked you about the impact of Raiders ticket prices on your ability to attend a game this year in Las Vegas and here’s what you said via Twitter:

Also, we have a current debate on the killer Sided.co site. Come debate with us the high Raiders ticket prices for 2020: