For second straight night, Braves hold on to edge Reds 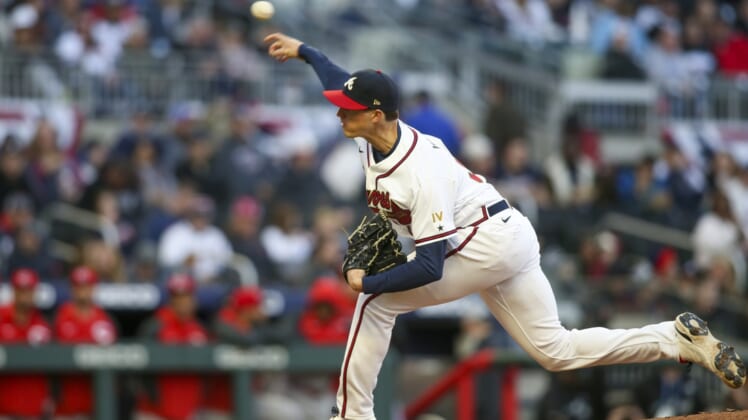 On the night when the Atlanta Braves received their 2021 World Series rings in a pregame ceremony, Kyle Wright made sure to mark the occasion in style.

The Atlanta right-hander limited the visiting Cincinnati Reds to two singles over six shutout innings and Marcell Ozuna doubled twice and singled to lead the Braves to a 2-1 win Saturday night.

For the second straight night, the Reds got to a Braves closer to make the game interesting in the ninth. Joey Votto singled off Will Smith with two outs to score Tommy Pham, before Smith induced Aristides Aquino to pop out to first to end the game and earn his first save of 2022.

Atlanta’s second straight win moved it to 2-1, interesting because the Braves weren’t above .500 last season until Aug. 6 (56-55), and then they went on a tear that led them to the National League East title and eventually a world championship.

Wright (1-0) retiring ten straight batters at one point before issuing a walk to open the seventh. Wright allowed only an infield single to Jonathan India in the third and a first-inning single to right from Tyler Naquin.

For the second straight night, the Braves took advantage of a Cincinnati starter who struggled with command early on.

Facing right-hander Vladimir Gutierrez, Matt Olson singled to left with one out in the first inning, giving him his fourth hit in his first three games with his new club. Austin Riley singled Olson to second before Ozuna doubled him home a 1-0 lead. Ozzie Albies lofted a sacrifice fly to center to score Riley for a 2-0 edge.

The Braves appeared ready to add to the lead in third when Olson worked a leadoff walk against Gutierrez.

With one out, Ozuna laced another double past a diving Mike Moustakas at third. Left fielder Jake Fraley scooped up the ball, threw to shortstop Kyle Farmer, who turned and fired a strike to catcher Aramis Garcia, who tagged Olson out at the plate.

The Braves chased Gutierrez in the fifth when they put runners on first and second with one out. Reliever Hunter Strickland escaped the jam by getting Ozuna to line out to center and Albies to fly out to center.

Olson was again thrown out at the plate in the seventh when Ozuna singled sharply to left with two outs. Aristides Aquino charged and threw a one-hop strike to Garcia.

Another Reds outfielder, Nick Senzel, made a spectacular diving play for a second straight night. His lunging grab robbed Alex Dickerson of extra bases in the sixth inning.