For Raiders Fans, Uncertainty Around TV Viewing Also Still to Be Answered 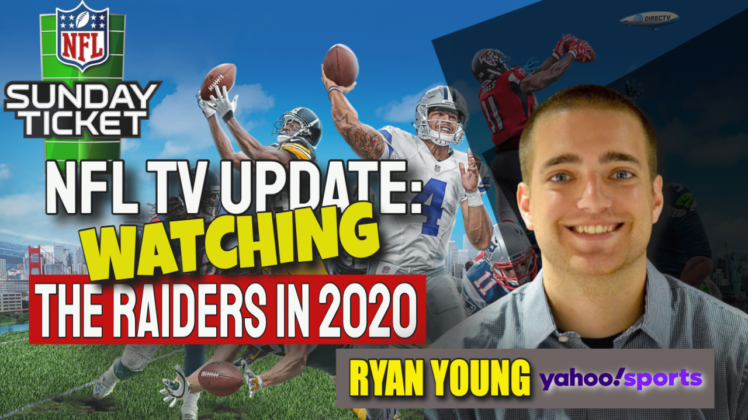 Ryan Young of Yahoo! Sports covers the NFL’s television contract and joined us to discuss how the league’s current status with the NFL Sunday Ticket package could impact viewership during the COVID-19 era and how that could impact Las Vegas Raiders fans.

As talk of a no-fan 2020 season continues to gain steam around the NFL, and in Las Vegas for the newly relocated Raiders, what hasn’t been in question is whether or not the league intends to play games. The NFL is full-steam ahead despite snags in negotiations with the NFL Players Association. If fans can’t attend games, and the only way to see your team play is via television, the question then becomes what will the NFL do to ensure fans get the most possible access to those games this coming season?

Ryan Young writes about the NFL’s media maze and we interviewed him last year when it appeared the league was ready to opt out of its lucrative deal with AT&T’s DirecTV. The service was the one place NFL fans could purchase out of market games giving fans the opportunity to see their beloved Raiders even if they live in Buffalo.

AT&T and NFL signed a eight-year, $12 billion deal for Sunday Ticket back in 2014. Grumblings out of the league last year said commissioner Roger Goodell and the league were unhappy with declining numbers on the satellite service, which is struggling to keep up with the rise of stream-only households. The talk was the NFL was ready to follow the NBA and create its own channel, app, and other access points to give fans a better way to stream and give the league more control over its own media destiny.

But that was last year – pre-coronavirus. And, although you’d expect the NFL to be ready to make a move despite our unusual times, it turns out the league is still undecided what it will do.

“I think unfortunately it’s been about the same spot it was a year ago, when we talked last,” Young told us on our CBS Sports Radio 1140 show Sunday. “I don’t think that the NFL has made much of a push to move away from Sunday Ticket (and AT&T), and especially with, you know, the coronavirus and all the questions surrounding the season.”

The uncertainty around the 2020 season isn’t making the issue of the television contract a top priority for Goodell and the owners.

Despite it not being a top priority, as the league can just ride out the contract for three more years, the access to games for fans should if they are not be allowed to attend games in person, becomes a unique and important issue for them to deal with. They can’t expect fans en masse to jump to a satellite TV provider just to watch some games.

Could the NFL offer an online version of Sunday Ticket (through AT&T) free to fans to make up for the lack of an in-person experience?

“I think that that’s going to be the hope, right, so if we assume that the season, either don’t allow full fans in or no fans at all, more people are going to have to watch it on TV,” Young said. “So you would hope that the NFL would say: ‘Okay let’s open this up. Our deals aren’t so set in stone that we can open it up and let people watch everywhere, or it’s just easier access for everybody because they’re going to have to otherwise, nobody’s going to be able to watch the games.”

When it comes to the AT&T deal, the NFL holds all the cards. While DirecTV struggles, the NFL has a contract they can live with and if AT&T can’t fulfill its obligation, the NFL can go a different direction.

Still, the biggest question is now how the TV scenario will play out at a time when people are confined mostly to their homes. They will want to watch the NFL this fall.

What could the NFL do to ensure their fans get their dose of their favorite team and the league overall? Young says watch the NBA closely this month as they restart their shortened season. What the NBA does successfully could be mimicked by other leagues including the NFL.

“I think that all eyes are really on the NBA and how that restart goes for a number of topics: how they handle player safety and testing and keeping the virus out of that bubble, but a big part of that too is how they run streaming for it because they’re gonna have some gains from national but others on the NBA app,” Young said.

“So I think if they can see how that goes, and how the NBA really plays that out, make it successful with all the extra eyes in the absence of over-the-air, and make sure that it works. I think that could really be kind of a blueprint. The blueprint for streaming games during a pandemic and a time where that’s the only way to see the league.”

For hometown viewers, they’ll get plenty of Raiders thanks to the string of smart TV deals the team has signed with local affiliates. The Raiders games in Las Vegas will be available mostly on the CBS affiliate with national games readily available too.

How fans around the league will be able to interact and consume media from their favorite team is still something we don’t know. Until the NFL makes a move, we’re stuck with the status quo for now.