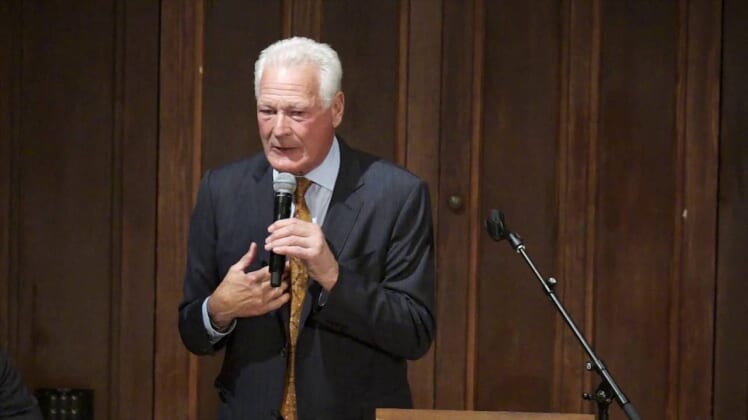 When it comes to telling you where he stands, legendary Oakland Raiders linebacker Phil “Foo” Villapiano doesn’t usually have a problem telling you what he thinks.

Villapiano is the perfect bridge on the air to the great Raiders teams of the past.

As part of our effort to lobby the powers that be in the Raiders organization, we had Villapiano on our show as we believe he’d add a great addition to the new team alongside Brent Musburger and Lincoln Kennedy. Although not officially confirmed by the team, both Musburger and Kennedy have confirmed their new roles as the organization said goodbye to long-time play-by-play man Greg Papa last week.

But does Villapiano have any interest in broadcasting with his old team?

“The answer is absolutely,” Villapiano said in his second appearance this year on the show this morning. “There’s nothing that would make me feel better than to every week go on the road with the team, take them (sic) at home, get to talk to them and get it back to where it used to be, and also get back to talking football with the fans.”

The 1971 Defensive Rookie of the Year thinks he’s the right guy to bring a nice mixture of both pro football player and football fan to the broadcast. In his view, many have overcomplicated the game on the air leaving fans behind. If he was able to secure a role with the Raiders, Villapiano said he’d be more like a fan than a pro football player in his approach to broadcasting.

“The answer is absolutely! There’s nothing that would make me feel better than to every week go on the road with the team, take them (sic) at home, get to talk to them and get it back to where it used to be, and also get back to talking football with the fans.”

“I think the guys that can add to it have to talk the language of the fans,” Villapiano said from his home in New Jersey. “I get a little tired of everybody talking about “Cover 2” and “Cover 3,” who cares about that. I’d like to talk about the individuals and bring some fun back to the game. You know, some broadcasters are gettings so far away from their audience, the audience has to have fun too. But if I got the job, it would be fun.”

Villapiano has been asked by former coaches and now Jon Gruden to come in and help fire up the team in the locker room and on the sideline, so a role as a team broadcaster could be a natural extension. The firey coach and fiery member of the Raiders “badass” teams of the 1970s seems like a match made in heaven.

“If Jon Gruden can keep this thing fun, which he did even as a broadcaster,” Villapiano said. “It’s going to be great. There’s a lot of room for fun – even in pro football.”

If the Raiders want to add that dose of fun to what is shaping up to be a great new broadcast team with Musburger and Kennedy, look no further than Villapiano. He’s waiting for the call.

What do you think?

As we get ready to have #PhilVillapiano on our show on @SportsRadio1140 tomorrow at 8am, and the news that @LKennedy72 will join @brentmusburger in the broadcast booth this season, where would you add FOO into the mix?