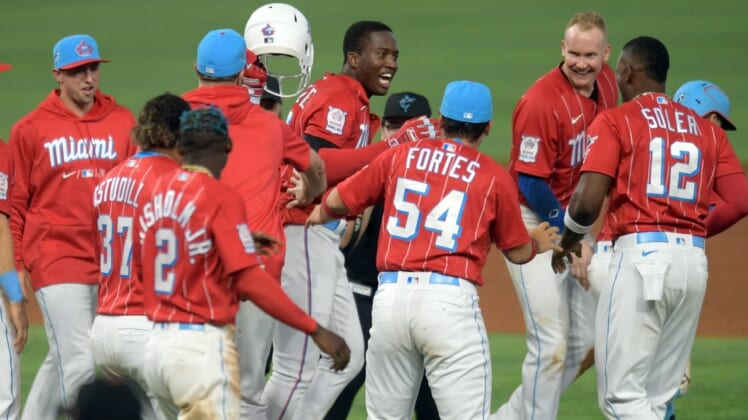 The Miami Marlins celebrated their first walk-off victory of the season on Saturday, rallying from a four-run deficit to defeat the San Francisco Giants.

Now the Marlins will look to clinch a series win Sunday afternoon, when they will host the Giants in the finale of a four-game set.

The Marlins hadn’t officially announced a starter, though left-hander Braxton Garrett was in the clubhouse Saturday and is expected to make his season debut Sunday.

Jesus Sanchez started and ended the Marlins’ rally Saturday. He ripped an RBI double to spark a four-run fifth inning and lofted the game-winning sacrifice fly in the ninth to lift Miami to a 5-4 victory.

The win followed the Marlins’ most lopsided defeat of the season — a 15-6 loss to the Giants on Friday — and continued an inconsistent campaign for Miami, which was 12-8 in April but 7-19 in May.

The Marlins opened June with a 14-1 win over the Colorado Rockies in the opener of a doubleheader Wednesday before losing the nightcap 13-12 in 10 innings. Miami then beat the Giants 3-0 on Thursday before absorbing the Friday rout and coming back Saturday against San Francisco starter Logan Webb, who allowed just one hit in the first four innings.

“We don’t know, but obviously these are ones that have a chance to do something like that,” manager Don Mattingly said when asked if Saturday’s win could jump-start the Marlins. “(They’re) all kind of looking for temporary ‘this is the one thing that changes it.’ Your starter (Sunday has) got to be good. Go out and win another game (Sunday), for me, is how you do it.

“But obviously this is a win your team feels good (about). You’re down four against their best guy and able to fight back and get in the game.”

Webb’s struggles in the fifth put Giants manager Gabe Kapler in the position of trying to mix and match relievers for a second straight game. San Francisco went with a bullpen game on Friday, when John Brebbia started and threw a scoreless inning.

Brebbia was the first reliever called upon Saturday, and he gave up the game-tying, two-run single to Garrett Cooper. That was the only hit allowed by the Giants’ bullpen until Trevor Rogers gave up a leadoff infield single to Jesus Aguilar in the ninth. After Rogers plunked a batter and committed a balk, Sanchez hit the game-ending fly ball to right.

“(Friday) was a bullpen day and that was a win and everybody out of the bullpen today pitched really well.” Rogers said. “And it kind of stinks that it ended the way it did.”

Garrett was 2-3 with a 5.18 ERA in 10 appearances (nine starts) for the Marlins over the previous two seasons. He was 2-1 with a 3.12 ERA in five starts this season for Triple-A Jacksonville, though he missed a little more than three weeks due to left shoulder inflammation.

Garrett last pitched for Jacksonville on May 29, when he tossed five scoreless innings of one-hit ball against Scranton/Wilkes-Barre.

Junis didn’t factor into the decision on Tuesday, when he gave up one run over 4 1/3 innings as the Giants beat the Philadelphia Phillies 7-4 in 11 innings.

Garrett has never opposed the Giants, and Junis has never faced the Marlins.