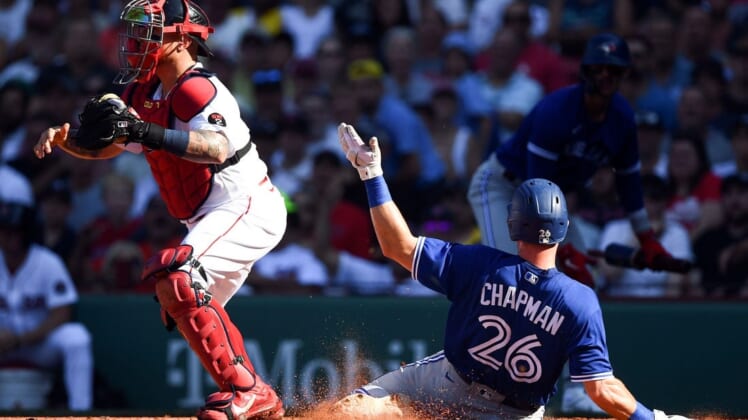 Santiago Espinal and George Springer had RBI singles to bring home the tying and go-ahead runs during a three-run third inning as the visiting Toronto Blue Jays earned a 4-1 win over the Boston Red Sox on Saturday.

Seven different players recorded one hit apiece and four drove in runs for Toronto, which has won back-to-back games to open a three-game series. Espinal scored a run and drove another home.

Alek Manoah (11-4) scattered seven hits and struck out seven over six innings of one-run ball in his second straight win.

Bobby Dalbec homered to drive in Boston’s run. He and Alex Verdugo were both 2-for-4. The Red Sox have lost four straight and 12 of their last 15.

Boston brought at least the tying run to the plate in both the seventh and eighth innings and didn’t score.

After Christian Vazquez walked and Xander Bogaerts was hit by a pitch to put two aboard in the eighth, Toronto reliever Adam Cimber struck out Franchy Cordero and All-Star closer Jordan Romano induced a Dalbec fly ball to center.

After allowing the most runs in franchise history in Friday’s 28-5 schellacking, the Red Sox got the scoring going thanks to Dalbec’s second-inning solo homer over the Green Monster.

Seven of Dalbec’s eight homers have given Boston the lead. However, the advantage didn’t last as the Jays put together a three-run third. Matt Chapman hit a leadoff single and scored from first after Espinal served a base hit into right-center.

Cavan Biggio doubled into center and set the table for George Springer’s go-ahead RBI opportunity on a line single. Alejandro Kirk’s sac fly gave Toronto a 3-1 lead that lasted into the late stages of the game.

Springer ended the third inning with a sensational leaping catch in center field, taking an extra-base hit away from Bogaerts.

The big inning and excellent defense helped Manoah work through six frames. The All-Star righty’s 236 strikeouts in 39 career games are the most in franchise history.