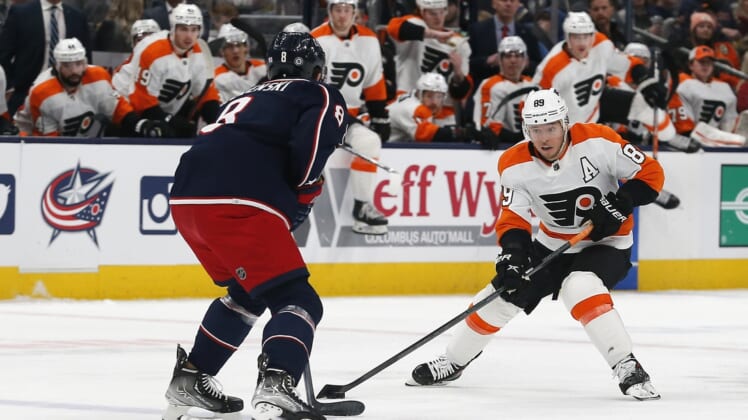 Kevin Connauton, Owen Tippett, Noah Cates and Travis Konecny each scored one goal to lift the visiting Philadelphia Flyers past the Columbus Blue Jackets 4-1 on Thursday.

The teams combined for only 10 shots on goal through the opening 15 minutes of the first period.

Columbus’ Carson Meyer was then whistled for a high-sticking infraction against Scott Laughton 14:47 into the game.

The Blue Jackets surprisingly took advantage with a short-handed goal by Robinson under the blocker of Jones at 15:06 for a 1-0 lead.

Philadelphia remained on the power play and Konecny ripped a shot off the post.

The Blue Jackets nearly took a two-goal lead when Patrik Laine fired a wrist shot just high and Jack Roslovic hit the crossbar at 7:27 of the second period.

Philadelphia equalized at 1-all in the second period when Connauton skated in all alone and scored high to the glove side over Merzlikins at 8:00.

When Tippett pounced on a loose puck and scored at 13:26, the Flyers went ahead 2-1.

After a couple of solid scoring chances by Columbus were denied, Cates gave the Flyers a 3-1 advantage at 16:41 of the second.

Merzlikins made an outstanding save at 2:51 of the third when he reached out and grabbed a slap shot by Ivan Provorov.

The Blue Jackets then struggled to generate much offense and the frustration was evident when Adam Boqvist was called for hooking James van Riemsdyk at 11:42.

Konecny slid the puck just over the line for a 4-1 lead at 16:55. The play was reviewed by the officials and it was quickly deemed as a good goal.

Columbus never posed a serious threat the rest of the way.