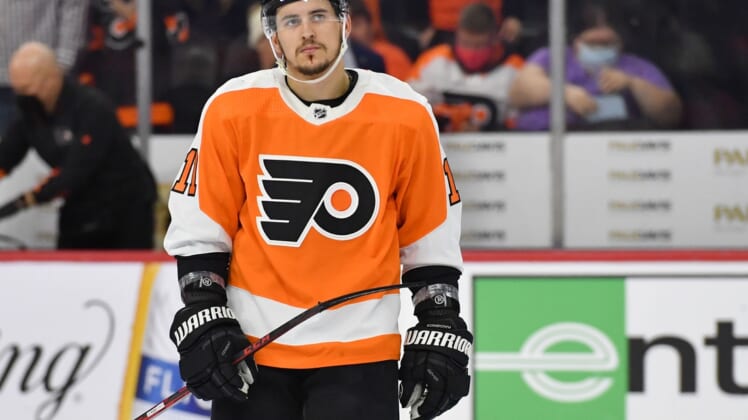 The Philadelphia Flyers will hope to avoid a 14th consecutive road loss when they visit the St. Louis Blues on Thursday.

The Flyers, who haven’t won on the road since a 3-2 overtime victory Dec. 29 at Seattle, fell 6-3 at Detroit on Tuesday.

“That loss was on me,” defenseman Rasmus Ristolainen said. “I gave them three goals and that cost us the game.”

The visit to St. Louis will be the second stop of a five-game road trip.

Philadelphia’s longest winless road skid occurred in 1971-72 as it struggled through an 0-15-4 streak.

Like they have all season, the Flyers cut into the deficit against the Red Wings only to quickly fall behind again. After closing within 3-2, they allowed a late second-period goal to Jakub Vrana and ultimately lost by three goals.

“Anytime you give up a goal in the last minute of a period, that’s tough,” Flyers interim coach Mike Yeo said. “But I thought we regrouped and came out hard in the third period. Obviously, there’s some things we can be better at execution-wise. We had some turnovers tonight and we’ve got to be a little bit sharper there. I did like the way the guys kept battling back for each other here tonight, just didn’t find a way to tie it up.”

Joel Farabee, Oskar Lindblom and James van Riemsdyk each scored one goal for the Flyers.

When you don’t protect the puck, bad things tend to happen.

“Overall, I thought we played a pretty solid game, minus a few turnovers that ended up in the back of our net,” Farabee said. “If we just clean that up, we can play more of a complete game and give ourselves a better chance.”

The Blues will look to build off of a strong performance in a 5-2 victory Tuesday on the road against the Washington Capitals.

Brandon Saad had one goal and one assist for the Blues, who have struggled with consistency in recent games.

“Every game’s important,” Saad said. “Every team in our division is battling for positioning. For us, it’s just controlling what we can and winning hockey games. Playoff hockey starts now.”

The news wasn’t all great for the Blues as defenseman Torey Krug left the game with an injury to his left hand and wrist. Rob Thomas was already out with an undisclosed injury and Vladimir Tarasenko missed a second consecutive game with an illness.

The injury-riddled Blues have dealt with a short-handed roster most of the season.

This is no different.

“We’ve done it all year,” St. Louis head coach Craig Berube said. “No different. It’s the way it is. What are you going to do?”

The Blues won only two of nine games before recently rebounding to work their way back in playoff contention.

“You wake up one morning and you’re in a wild card — that’s the way it goes,” Berube said. “We gotta keep winning games. That’s what it tells you. That’s it.”