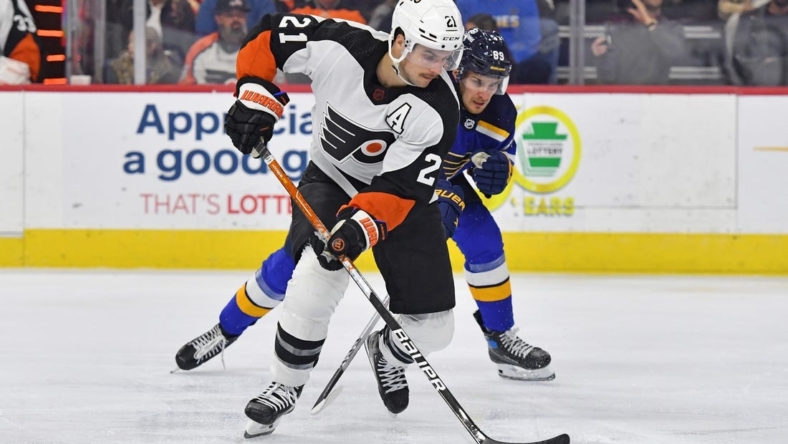 Noah Cates, Owen Tippett and Travis Konecny each had one goal and one assist to lift the host Philadelphia Flyers past the reeling St. Louis Blues 5-1 on Tuesday.

Wade Allison and Lukas Sedlak each added one goal for the Flyers, who won their second game in a row.

Flyers goaltender Felix Sandstrom received the start because Carter Hart was scratched earlier in the day due to an illness. Sandstrom made 28 saves for his first NHL win in his ninth start, his fourth start this season.

Ryan O’Reilly scored the lone goal for the Blues, who set a franchise record with their eighth consecutive regulation loss.

The game was chippy from the beginning as two fights occurred in the opening 4:30 of the first period.

The Flyers began attacking with a flurry of shots late in the first, most notably by Ivan Provorov and Tony DeAngelo. Konecny then fired a shot that was saved by Greiss at 18:30.

Greiss kept the game scoreless with 18 saves, including several stellar stops, in the opening 20 minutes.

Philadelphia’s Zack MacEwen was whistled for high-sticking at 5:35 of the second. St. Louis’ then Brayden Schenn had a solid scoring chance as he redirected Pavel Buchnevich’s shot. O’Reilly also had a point-blank shot in front, but Sandstrom made another save.

The Flyers went ahead 1-0 at 10:11 of the middle period. Provorov sent a pass into the crease, and Allison corralled the puck off the top of his stick and then squeezed it past Greiss. The goal was Allison’s third of the season.

Konecny snapped a wrist shot into the top left corner of the net at 16:37 of the second for a 2-0 advantage. Konecny increased his goal total for the season to five.

The Flyers took a commanding 3-0 lead with just three seconds left in the period as Cates redirected Travis Sanheim’s shot for his second goal of the season.

St. Louis’ Vladimir Tarasenko and Schenn each fired shots on a power play in the first minute of the third period, but Sandstrom sprawled out to stop both shots.

The Blues closed within 3-1 at 5:22 of the final period when O’Reilly connected for his second goal of the season.

The Flyers regained a three-goal lead 1:22 later when Sedlak scored his first of the campaign.

Tippett added the third goal for the Flyers with 38.5 seconds left.