Flyers’ Joel Farabee has surgery, could miss start of next season 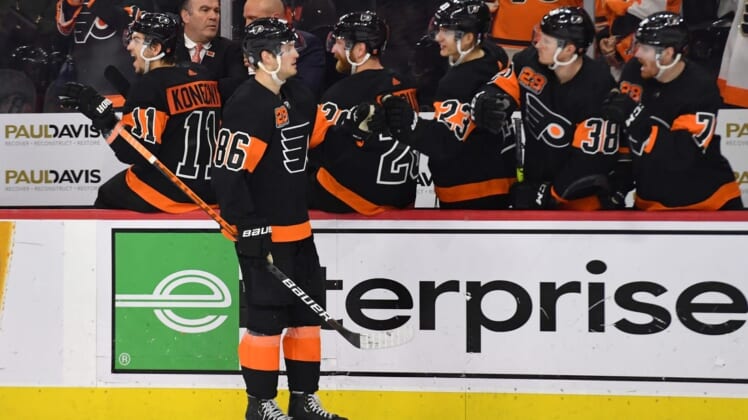 Philadelphia Flyers forward Joel Farabee could miss the start of next season after undergoing disk replacement surgery on his neck.

Farabee is expected to require three to four months to recover from Friday’s surgery. That would mean the 22-year-old will miss the majority — if not all — of training camp and possibly the start of the season.

He recorded 34 points (17 goals, 17 assists) in 63 games this season. He missed 19 games due to a pair of injuries to his left shoulder area.

“Shoulder feels good,” Farabee said at his end-of-the-season press conference April 30. “I think coming back the first time, it definitely wasn’t in great shape. Definitely tried to play through it a bit, but I think coming back from the second time, I felt a lot stronger. Ever since then, it’s been good.

“Obviously it gets a little sore with the schedule, playing back-to-backs and stuff like that, it can get a little sore. But at the end of the day, the strength was there and I felt pretty good the last few weeks of the season there.”

Farabee led the Flyers in 2020-21 with 20 goals and added 18 assists. He became the second-youngest player, following Hockey Hall of Famer Eric Lindros, to lead the franchise in goals for a season.