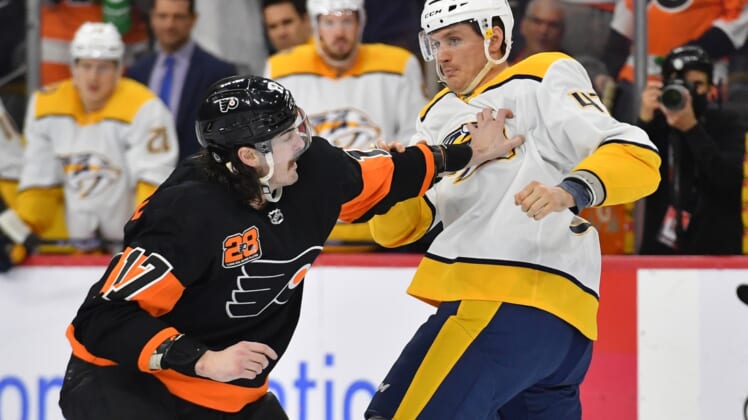 Joel Farabee scored the go-ahead goal at 18:41 of the third period to lift the host Philadelphia Flyers past the Nashville Predators 5-4 on Thursday.

Farabee also had an assist while Kevin Hayes and Travis Sanheim each added one goal and one assist for the Flyers, who snapped a three-game losing streak.

The Flyers held a lengthy pregame ceremony to honor captain Claude Giroux before competing in his 1,000th career game with the franchise. Bobby Clarke is the only other player in history to accomplish the feat with the Flyers.

Tanner Jeannot, Phil Myers, Ryan Johansen and Filip Forsberg each scored one goal for the Predators.

Roman Josi had three assists, propelling his season total to 52.

The Flyers took advantage of a turnover and Sanheim connected for a 1-0 lead at 7:44 of the first period.

Saros was outstanding in the opening period and kept the Predators close with 16 saves.

The Predators equalized at 1 just 23 seconds into the second period when Jeannot fired a shot just under the crossbar.

Philadelphia soon picked up a power play and York scored at 1:22 for a 2-1 advantage.

The Flyers continued their aggressive play and extended their lead to 3-1 when van Riemsdyk pounced on a rebound at 3:48.

Nashville quickly closed within 3-2 when Myers, a former Flyer, scored his first goal of the season at 5:16.

Soon after Travis Konecny was whistled for a double minor for high sticking, Johansen tied the game at 3 when he scored on the power play at 16:05.

The Predators went ahead 4-3 at 1:11 of the third when Forsberg shot the puck between his legs and past Hart.

Philadelphia appeared to tie the game at 4 when Derick Brassard capitalized on a bouncing puck and scored at 13:28. But the Predators challenged the ruling and were successful for an illegal high stick on Cam Atkinson.

The Flyers eventually equalized at 4 when Hayes connected at 15:45.

Nashville had several strong chances in the final minute with an empty net but weren’t able to score.