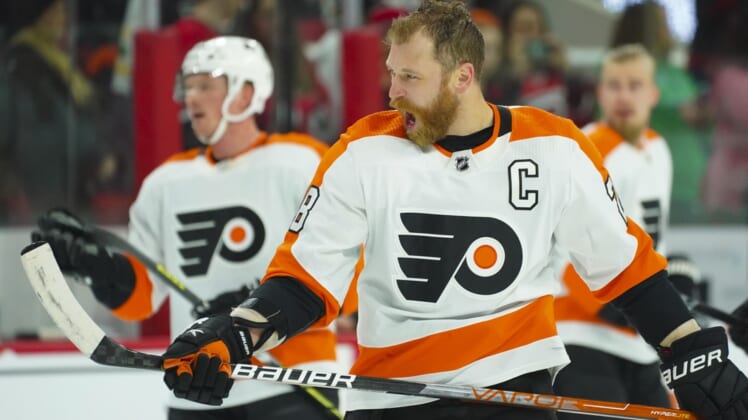 The Philadelphia Flyers will look to avoid a third consecutive loss when they host the Montreal Canadiens on Sunday night.

The Flyers followed a 6-3 loss to the Florida Panthers on Thursday with a 3-1 setback to the Carolina Hurricanes two days later. Philadelphia will have a short turnaround when it plays the Canadiens.

Mistakes down the stretch have continued to be costly for the Flyers.

“I liked the effort. I liked a lot of the details in our game,” interim coach Mike Yeo said. “Obviously not every shift is perfect and it’s tough to be against a team like that. But I thought we gave ourselves a chance to win. Just have to finish it.”

The depleted Flyers couldn’t keep up with the impressive Hurricanes.

Frost appeared in the game because Scott Laughton sustained a concussion in Thursday’s loss to the Panthers.

“Laughts is an emotional leader for our group, and he’s been playing at such a high level for us,” Yeo said.

Frost, a first-round draft pick in 2017, has struggled to stay healthy this season. With the team hampered by many injuries, young players such as Frost will be given a chance until the end of the season.

“I thought he was real assertive, aggressive,” Yeo said. “For him, I think the lesson is that he’s capable of doing it.”

Goaltender Martin Jones made 33 saves, but Yeo said Carter Hart would be the starter against the Canadiens.

The Canadiens also hope to avoid a third straight defeat when they visit Philadelphia.

Montreal trailed by two goals heading into the third period before scoring twice to force overtime against the Seattle Kraken on Saturday. The Canadiens, however, lost 4-3 in a seven-round shootout.

Defenseman Alexander Romanov collected one goal and one assist for the Canadiens.

It was another frustrating finish in a season filled with tough losses for Montreal, which advanced to the Stanley Cup Finals last season.

“Looking back at last year, you don’t just make the final just on luck, right?” Josh Anderson said. “I think we had a good team. There’s a lot of good pieces here.”

Despite the litany of losses, the Canadiens continue to compete. That was evident during Saturday’s spirited rally against the Kraken.

“There’s been a lot of ups and downs throughout this season,” defenseman Chris Wideman said. “I think the way we’ve come together — and this group stuck together even through the tough times. I don’t think there was any negativity in the room towards each other. This is one of the closer teams that I’ve been on.”

After the trip to Philadelphia, the Canadiens will return home for six consecutive games.