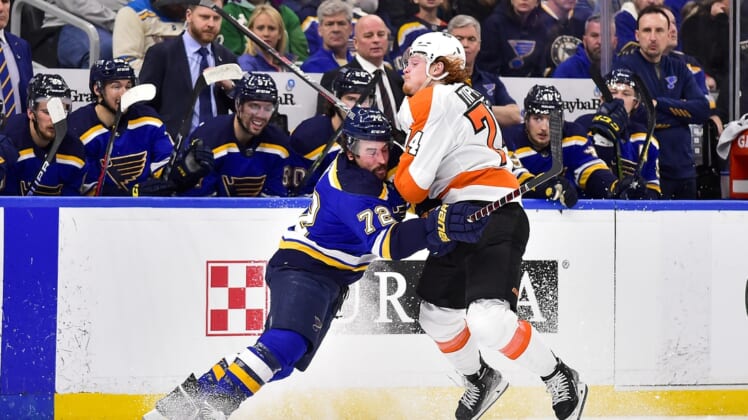 Hayden Hodgson had one goal and one assist and Patrick Brown added one goal for the Flyers, who snapped a 13-game road losing streak. Joel Farabee also scored an empty-net goal.

Philadelphia’s Owen Tippett, who was acquired from the Florida Panthers in the trade for Claude Giroux, fired a shot off the post at 4:56 of the first period.

The offensive pressure paid off when Konecny connected at 6:37 for a 1-0 lead.

St. Louis failed to register even one shot on goal through the opening 11 minutes.

The Flyers went ahead 2-0 when Brown scored at 14:51. The Blues appeared to argue for goaltender interference, but the play wasn’t reviewed by the officials.

The Blues managed just three shots in the first period, though Jordan Kyrou had a stellar scoring chance at 17:30.

St. Louis closed within 2-1 when Tarasenko scored on the power play at 1:47 of the second period. Tarasenko had missed the previous two games with an illness.

Philadelphia took a 3-1 advantage when Konecny recorded his second goal of the game. The shot trickled by Binnington and just over the line at 12:04.

Toropchenko took advantage of a miscue by Jones behind the net and got the Blues within 3-2 at 16:00.

Rasmus Ristolainen nearly gave the Flyers a two-goal lead, but Binnington stretched out for a nifty save at 6:47 of the third.

Hodgson extended the Flyers’ advantage to 4-2 at 11:34; it was his first career goal in his first NHL game.

Soon after Binnington was pulled for an extra skater, Farabee scored an empty-net goal for a commanding 5-2 lead, at 17:20.