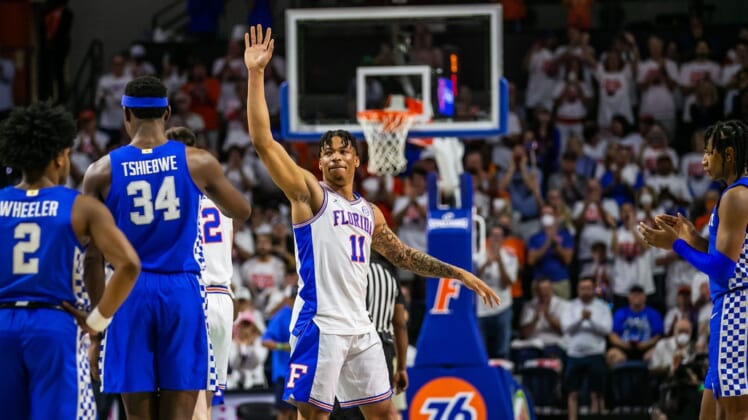 According to reports, Johnson is accused of having nonconsensual sex with a woman, described as “heavily intoxicated,” on Feb. 26 at a party in Gainesville.

Fresh Take Florida, a news service at the university, said Johnson admitted to his accuser in a phone call, as police listened, that he had unprotected sex with her. Despite her intoxication, she reportedly had a flash of memory of Johnson being on top of her and underwent a sexual assault exam, then contacted police.

The two were previous sex partners, but for several months, the woman had declined further attempts by Johnson to pursue a physical relationship, per the report.

Johnson has yet to be indicted, and the decision whether to file charges could take months.

The 2020-21 SEC Preseason Player of the Year, Johnson collapsed during the first half of the Dec. 12, 2020, game against Florida State and hasn’t played since. The exact cause of his collapse wasn’t made public, and his family said in February 2021 it was not related to COVID-19.

On March 5, he had a commemorative start on Florida’s senior day. Kentucky and Florida took part in a ceremonial tipoff, with the Gators getting the ball to Johnson. After a few dribbles, he handed the ball to officials and walked off the court to a standing ovation before the game’s official tipoff.

He has been an unofficial coach for the Gators since his collapse and is expected to graduate in May.