Florida State’s Jordan Travis too much for Georgia Tech 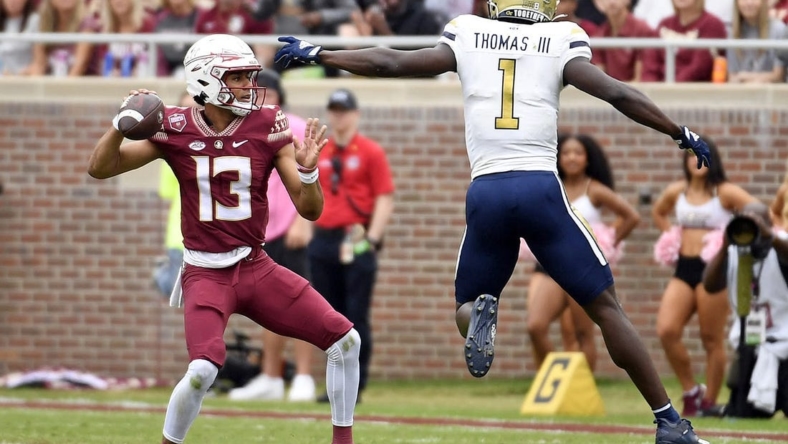 Travis completed 24 of 38 passes with three touchdowns. Lawrance Toafili caught a score and ran for one, and Johnny Wilson (three catches for 111 yards) and Ja’Khi Douglas each had TD receptions.

Making his first start for Georgia Tech (3-5, 2-3), Akron transfer Zach Gibson was removed early after completing 2 of 3 passes. Zach Pyron replaced him and was 18-of-28 passing for 198 yards with a rushing score and TD pass to E.J. Jenkins.

The Seminoles were successful on the second of two fourth-down conversions, but on third-and-goal from the 1, Toafili fumbled a direct snap which was recovered by linebacker Charlie Thomas and returned 71 yards. Gavin Stewart drilled a 38-yard field at 3:58 to the put the visitors from Atlanta up 3-0.

Aided by a pair of 15-yard penalties that kept its drive alive, Florida State finally cashed in when Toafili was able to dive and hit the pylon with the football on a 7-yard run. That TD capped a nine-play, 80-yard drive.

Early in the first quarter, the 6-foot-7 Wilson reached up and hauled in a pass along the sideline from Travis, made one defender miss and ran away for a 78-yard score and a 14-3 lead.

Looping out on a wheel route late in the half, Toafili caught a short lob from Travis, broke one tackle and dashed 62 yards to the end zone. Ryan Fitzgerald’s 34-yard kick put it at 24-3 in the lopsided half.

In a dominant showing over 30 minutes, the Seminoles led Georgia Tech 360-24 in total yardage and 17-1 in first downs.

After a successful onside kick to open the second half, Pyron tossed his first career TD, a 32-yarder to Jenkins at 13:06, but Travis answered with a 24-yard TD to Douglas to end a 91-yard drive.