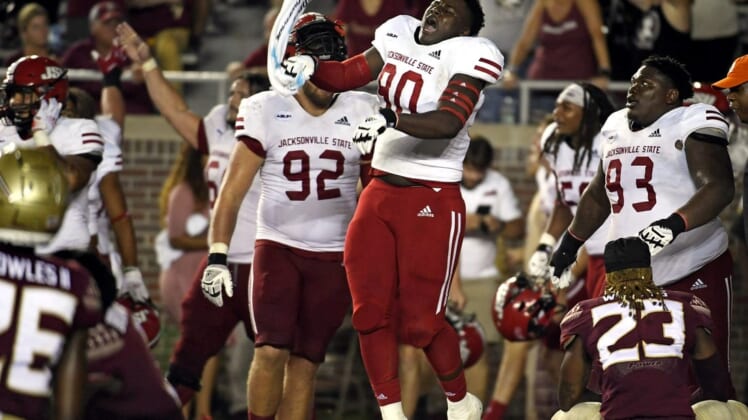 The Seminoles want to avoid a repeat of 2021, and again Mike Norvell’s team is hosting a Football Championship Subdivision program early in the season.

The Seminoles square off with Duquesne on Saturday hoping to play the role of Jacksonville State.

Just six days after the Seminoles rallied but lost 41-38 in overtime against No. 9 Notre Dame to start the 2021 season, the Atlantic Coast Conference team returned to Doak Campbell Stadium. And in rolled Jacksonville State.

The Gamecocks – who received $400,000 for visiting the Sunshine State’s panhandle – upset FSU by scoring the game’s final 14 points, including on a 59-yard pass as time expired to spark a celebration of their landmark 20-17 upset over the traditional football powerhouse.

The past four losing seasons – 19-27 overall, .413 winning percentage — have damaged the status of the once mighty Seminoles, who are on their second head coach since Jimbo Fisher resigned on Dec. 1, 2017, to take the same position at Texas A&M.

The West Palm Beach, Fla., native, who took just a few snaps behind starter McKenzie Milton in the JSU shocker, was 122-for-194 with 1,539 yards, 15 touchdowns and six interceptions. He rushed for 530 yards and seven scores.

Norvell’s offensive scheme, which propelled Memphis to a 38-15 record during his four years with the Tigers (2016-19), has been difficult for the junior signal-caller.

“This playbook’s tough, I’m not going to sugarcoat it at all,” Travis said. “I’ve worked very hard understanding everything about it. We’re still adding stuff and changing things week by week. The main thing for me is helping everyone else understand it.”

Duquesne went 7-3 last season, opening with a 45-3 loss at TCU but rebounding the next week with its biggest win – a 28-26 road win over FBS Ohio University of the Mid-American Conference.

The Dukes finished 5-2 in the Northeast Conference, dropping consecutive October tilts at Sacred Heart (31-13) and home against Saint Francis (17-10). In preseason NEC polling, Sacred Heart and Duquesne – the only two teams with overall winning records in 2021 – were picked to finish first and second, respectively, in the now-eight-team conference, which has added Stonehill College.

Duquesne travels to play Hawaii on Sept. 17, but all the attention now is on the Seminoles.

“It’s a huge challenge and a great opportunity,” said Dukes head coach Jerry Schmitt, who has led his group to five conference titles since 2011, including the outright crown in 2015 and a portion of four others over his 18 seasons.

“We’re going to play it like every other game and try to play our best football game, and we’ll try to figure it out from there,” he added.