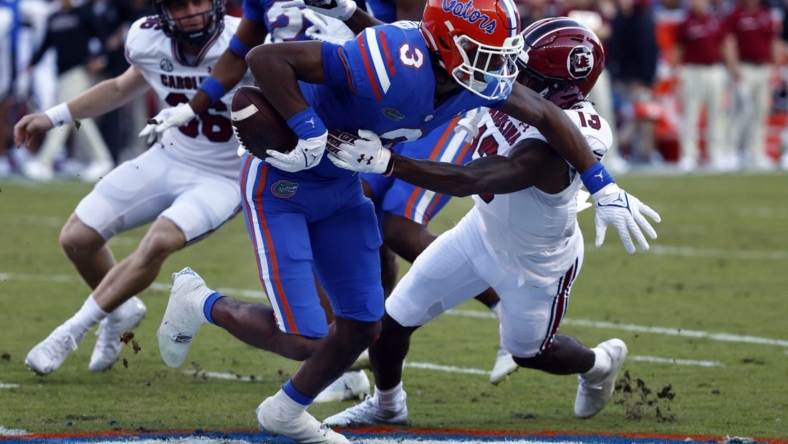 Anthony Richardson threw for two touchdowns and ran for another as host Florida became bowl-eligible in coach Billy Napier’s first season with a 38-6 victory over South Carolina on Saturday in Gainesville, Fla.

Montrell Johnson Jr. ran for 161 yards and a touchdown on 24 carries, while Trevor Etienne rushed for 100 yards, including an 85-yard touchdown run, on eight carries. Caleb Douglas had three receptions for 53 yards for the Gators, who scored touchdowns on their first three possessions and kicked a field goal on their fourth drive.

Spencer Rattler went for 18-for-26 passing for 145 yards, while Jaheim Bell ran for 30 yards on 12 carries. Dakereon Joiner had two catches for 73 yards, including a catch for a 48-yard score off a fake punt.

Florida outgained the Gamecocks 515-205, holding them to just 11 first downs and 3 for 11 on third-down conversions. The Gators rushed for 374 yards and three touchdowns.

Leading 24-6 at halftime, the Gators put the game away on Richardson’s 4-yard touchdown pass to Jonathan Odom for a 31-6 lead with 9:43 left in the third quarter.

The Gators took a 7-0 lead on their opening possession when Richardson’s 3-yard run capped a 14-play, 75-yard drive with 9:17 left in the first quarter.

After a South Carolina punt, Richardson capped a seven-play, 64-yard drive with a 15-yard strike to Pearsall for a 14-0 lead with 4:31 left in the first quarter.

The Gators pushed the lead 21-0 when Etienne ran down the sideline 85 yards into the end zone with 1:59 left in the first quarter.

South Carolina pulled to 24-6 when punter Kai Kroeger threw a 48-yard touchdown pass to Joyner on a fake punt with 1:52 remaining in the first half, though the two-point conversion failed.