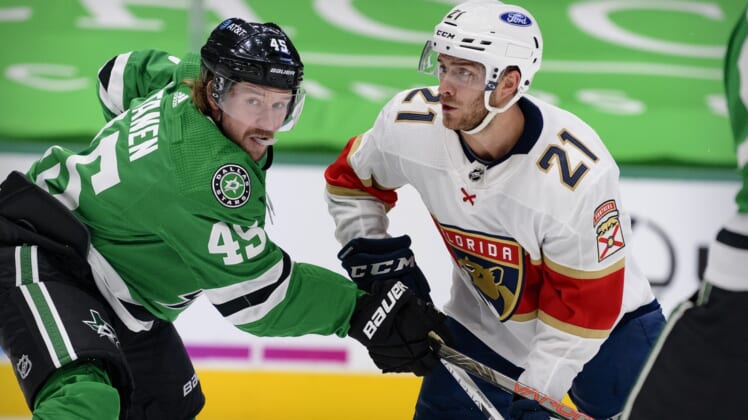 Frank Vatrano scored a power-play goal with 1:51 left in overtime, leading the Florida Panthers past the host Dallas Stars, 3-2, on Tuesday night.

There were just six seconds left on the power play when Vatrano scored off a pass from Gustav Forsling. The 4-on-3 man-advantage was set up when Dallas’ Jamie Benn tripped Anthony Duclair, who appeared to injure his left knee on the play.

The Panthers, who also got goals from Aleksander Barkov and Radko Gudas, snapped their season-high-tying three-game losing streak.

It was Gudas’ first goal in 67 games. Barkov has four goals in five games against the Stars this season. Barkov also leads the Panthers with 18 goals on the season.

Chris Driedger made 24 saves, improving to 3-1-0 in four games against Dallas this season.

Dallas got goals from Jason Robertson and Joe Pavelski. Robertson, a Rookie of the Year candidate, scored his 12th goal of the season and his fourth in his past four games. Pavelski scored his team-high 16th goal.

Anton Khudobin made 28 saves, but he couldn’t keep the Stars from losing their second straight game.

Dallas is 2-12 in games decided after regulation. Florida is 8-4 in those situations.

The Stars were without winger Roope Hintz, who has a lingering lower-body injury. Hintz, who had played in Dallas’ previous game, is second on the team with 32 points.

Panthers winger Carter Verhaeghe missed the game and was listed as “week-to-week” with an upper-body injury. He is second on the team with 17 goals.

Florida opened the scoring with 11:50 gone in the first. Jonathan Huberdeau dug the puck out of the corner, and Markus Nutivaara dished to Barkov, who buried his chance from the slot.

Dallas tied the score just 52 seconds later as Robertson scored on his second effort, beating Driedger with a high shot from point-blank range. Benn and John Klingberg had assists.

The Panthers took a 2-1 lead with 2:45 elapsed in the second. Gudas’ shot was deflected off the stick of a Stars player, and the puck fluttered and floated over Khudobin and into the net.

Dallas tied the score 2-2 with 11:34 left in the third. Benn fed Robertson, whose shot hit the right post before Pavelski cleaned up the rebound.

With 9:47, Driedger made an incredible save, diving back and reaching with his stick to stop a puck that was slightly but not fully over the line. That proved to be a big play in Florida’s victory.