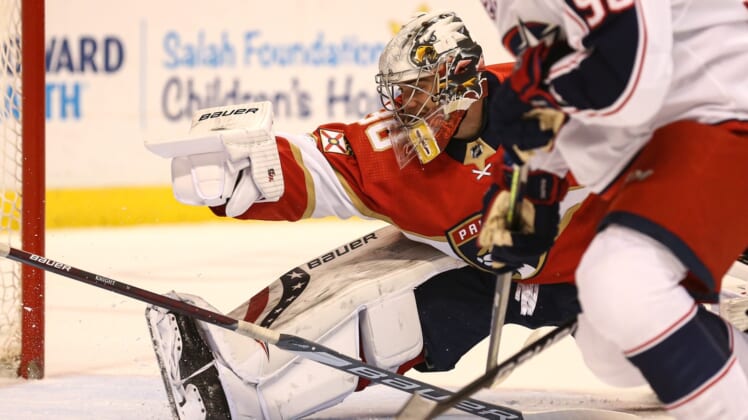 Knight, selected by the Panthers with the 13th overall pick of the 2019 draft, made 33 saves and was named first star of the game. The 20-year-old Connecticut native signed his entry-level contract late last month after two seasons at Boston College.

Jonathan Huberdeau had a goal and two assists for the Panthers, who also got goals from Aleksander Barkov and Ryan Lomberg. Anthony Duclair notched three assists.

Florida finished 7-0-1 against Columbus this season after sweeping two meetings the past two nights. The Panthers are 4-0-1 overall in their past five games. The Blue Jackets are winless in its past seven (0-6-1) and are 2-12-2 in their past 16.

The Panthers took the lead in the first period by scoring twice within a span of 14 seconds.

Barkov got Florida’s first goal by scoring off a pass from Nikita Gusev at 6:52.

At 7:06, Bennett knocked a puck out of the air and past goalie Korpisalo off a shot by Anthony Duclair to make it 2-0.

Columbus came back later in the period, cutting its deficit in half thanks to a power-play goal from Jack Roslovic at 16:16.

With 56 seconds remaining in the first, Roslovic appeared to tie the score off a breakaway pass from Patrik Laine, but Florida’s video challenge for offside was successful, and the goal was waved off.

The Panthers pulled away in the second, scoring three goals to take a 5-1 lead into the third.

Bennett got it going by scoring off a rebound at 7:04. It was his third goal in two nights against Columbus and fifth point since joining the Panthers three games ago.

At 15:42 of the second, Lomberg batted down a shot from Frank Vatrano and put it past Korpisalo to make it 4-1.

Huberdeau finished off the second-period scoring spree less than a minute later off an assist from Duclair.

The Panthers will play host to the Carolina Hurricanes, one of the teams they are battling for the top spot in the Central Division, on Thursday and Saturday. The Blue Jackets travel for a pair at Tampa Bay on Thursday and Sunday.