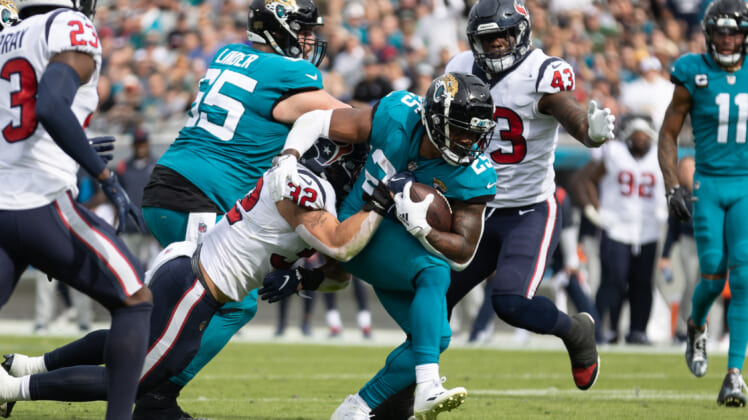 Only in Jacksonville. Things have been a bit wild with the Jacksonville Jaguars lately, with the whole Urban Meyer fiasco. One particular fan took it to a new level early during their Week 15 matchup with the Houston Texans, creating a distraction of his own, this time during the game.

In the second quarter, with the Jaguars trailing the Texans 14-3, Jacksonville had the ball in the red zone at the one-yard line. Just before Trevor Lawrence took the snap, a fan in a Jaguars jersey could be seen jogging along the field, inside the Jacksonville endzone.

Seemingly unbothered by the events, (why should he be, he lived through the Urban Meyer experience), Lawrence hands the ball off to Jaguars running back James Robinson who plunged into the endzone for the touchdown.

All while the play was happening, the Jaguars fan lost a shoe and proceeded to raise his arms in celebration of the Jaguars getting their first touchdown of the game.

While this behavior, getting onto the field while athletes are performing, should never be celebrated, this situation is certainly unique. But not necessarily in a good way. Fans definitely need to know their place on game day, and that remains in their seats, not trying to get in on the action.

It’s as if Zach Galifianakis broke loose from the stands and got onto the field after filming another Hangover movie. Whatever happened, it didn’t seem to impact the Jags one bit.

The Jacksonville Jaguars are hoping to move on to 3-11 today if they can come away victorious against the Texans. Maybe the trick is to create more pre-snap movement from the fans. Though we hope this sort of behavior doesn’t create a trend, it certainly provided a highlight for the Jaguars. Let’s just hope their future highlights don’t involve their fans, that’s more of an Urban Meyer thing.