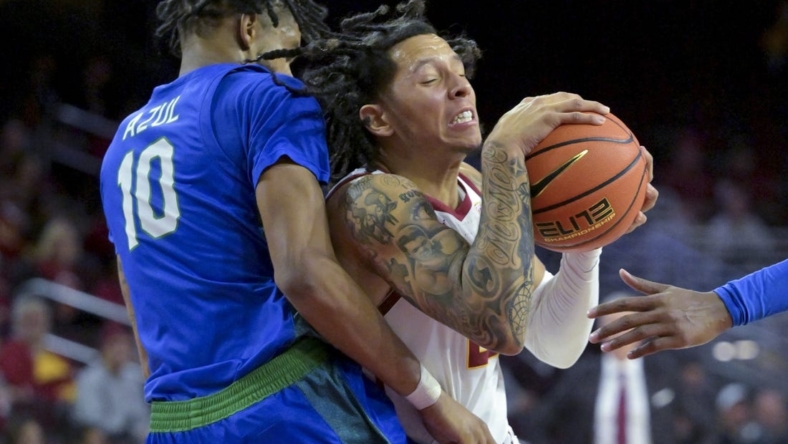 The Eagles (1-0) fell behind 21-10 midway through the first half and appeared headed for a lopsided loss. But a 19-9 run before halftime cut the deficit to one, setting the scene for Florida Gulf Coast in the second half.

Florida Gulf Coast took over during the Trojans’ latter dry spell, going on a 17-3 run that blew the game open. The Eagles lead swelled to as many as 20 points as USC coach Andy Enfield — who coached Florida Gulf Coast to a historic Sweet 16 appearance in 2013 — sought for answers.

The 3-point line offered no solution for USC. After Boogie Ellis made one from beyond the arc about five minutes into the contest, the Trojans went without another successful 3-pointer until Ellis hit another with just 3:20 remaining in regulation.

USC shot 3-of-19 from outside as a team, and finished a collective 21-of-52 from the field for the night. The Trojans also committed 15 turnovers.

Chase Johnston — who led all scorers with 20 points — and Dahmir Bishop contributed to the Eagles defensive dominance with a pair of steals each. Bishop also scored 10 points.

Johnston keyed Florida Gulf Coast with 7-of-14 shooting from the floor, including 4-of-11 from 3-point range, coming off the bench. Fellow reserve Zach Anderson grabbed a game-high 10 rebounds, and Cyrus Largie added seven points and eight rebounds off the bench.

Johnston teamed with Isaiah Thompson to ignite the Eagles’ decisive run, scoring the first 10 points in the second-half burst. Thompson finished with 16 points.

Ellis was the only Trojan to score in double figures with 19 points. Drew Peterson finished with seven points, nine rebounds and six assists, but also committed six turnovers.

Reserve Malik Thomas scored a pair of buckets late, helping USC pull to within single digits, but the Trojans could get no closer than nine points.