Sportsnaut
Florida head coach Mike White works with his team during the first half of the SEC Men’s Basketball Tournament game against Tennessee at Bridgestone Arena in Nashville, Tenn., Friday, March 12, 2021. Ut Fla Sec 031221 An 014

Florida has given coach Mike White a two-year contract extension, according to reports.

The deal, which was signed in late May, extends White’s contract through the 2026-27 season. With the extension, White is slated to earn $19.1 million over the next six years, an average of nearly $3.2 million a season.

White, 44, is 123-75 in six seasons at Florida. He has led the Gators to four NCAA Tournaments, including last season when Florida reached the second round before being ousted by Oral Roberts.

Before coaching the Gators, White was 101-40 in four seasons with Louisiana Tech. 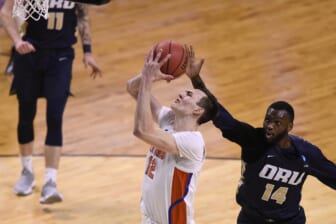