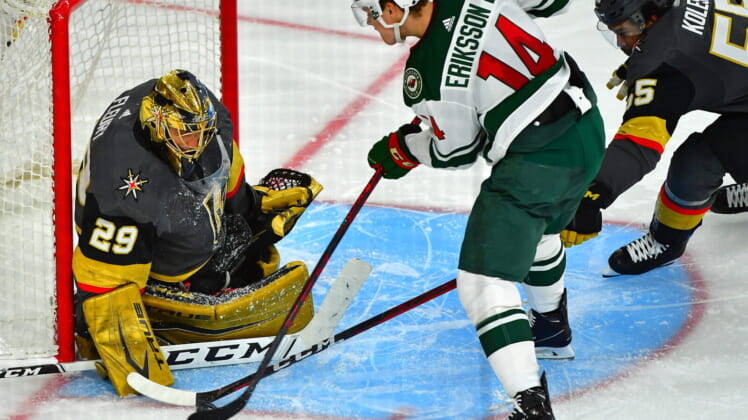 Game 1 of the 2021 Vegas Golden Knights playoff run is complete and it was every bit the battle expected. Despite having 42 shots, the Golden Knights couldn’t solve Cam Talbot.

It took overtime but the Minnesota Wild, thanks to an extra period goal by Joel Eriksson Ek, beat the Vegas Golden Knights 1-0 in the first game of the NHL Stanley Cup playoffs in Las Vegas Sunday.

Playoff hockey is a different animal and Game 1 between the Golden Knights and Wild displayed that perfectly. It was a goaltending duel that went down to the wire with neither team making many mistakes. Marc-Andre Fleury and Cam Talbot traded big saves back and forth as neither team managed to crack the opposing goalie for the first three periods.

The absence of goals wasn’t due to a lack of scoring chances, instead, it was the exceptional play of both goalies that was responsible. Fleury in particular made several highlight-reel saves that frustrated the Wild and Talbot was the victim of a heavy workload as the Golden Knights fired 42 shots.

It took a shot from Joel Eriksson Ek in overtime to break the tie, giving the Wild an early lead in this West Divison playoff series. He capitalized on a puck he found in the slot after an Alex Pietrangelo turnover allowed the Wild to sustain pressure in the offensive zone.

There were 8,683 fans at T-Mobile Arean on the Las Vegas Strip for this game — 50% capacity rounded down by one — and they made their presence felt, regularly erupting after another huge Fleury save. While there are still six potential games left in the series, Game 1 provided a case study that gave us a good idea as to how the series might unfold.

Outlined as one of the keys for victory before the series began, the Golden Knights failed to convert on any of their three opportunities. During a crucial third-period powerplay, head coach Peter DeBoer called timeout with just under a minute left with the man-advantage, determined to let his first unit stay on the ice. They failed to score.

The Golden Knights are clearly missing Max Pacioretty who has been absent due to injury. He tied for the team-lead with six powerplay goals during the regular season, yet he hasn’t played since early May.

“With Patches [Pacioretty] out of the lineup, we gotta have other guys finish those chances,” said head coach Peter DeBoer in the postgame.

With it still unclear when he will be available, the Golden Knights are going to need to find a solution in a hurry.

Goals Will be Hard to Come by

Goals are going to be a valuable resource in this series as Game One displayed. It wasn’t just the great goaltending, both teams also played solid defensively and didn’t make too many mistakes. It was far from a free-flowing game, instead both teams playing checking hockey with many of the shots being from the outside or forced through lots of traffic.

Considering that Vegas outplayed Minnesota for long stretches, it becomes even more crucial to take advantage and put something up on the scoreboard.

“When you get the grade-As you gotta bear down and score them, and we had lots of them,” said captain Mark Stone after the game.

In the first period, the Golden Knights had four high-danger scoring chances at 5-on-5 compared to the Wild’s zero. They went into the intermission tied at 0-0.

Toughness Will Win Out

The physicality of both teams was evident as they traded big hits. Power forward Ryan Reeves returned to the lineup and made his presence felt with 10 hits in just 11:12 of ice-time. The Wild’s power forwards were happy to return the favor as both Jordan Greenway and Marcus Foligno recorded double-digit hits.

In a series like this, it’s the tougher team that will be left standing at the end. The Wild were that team tonight as they endured a first period barrage before emerging and fighting for the rest of the game.

Looking to the rest of the series, the Golden Knights need to be able to finish their opponent when they have them in a vulnerable position. That starts with being tough enough to not get demoralized when things aren’t going your way. With veterans such as Fleury and Alex Pietrangelo on the team, you can be sure the Golden Knights will be ready to play on Tuesday night.

Game Two of the series is Tuesday night at 7 PM PDT at T-Mobile Arena once again. After that, the series will move to Minnesota for two games that will take place on Thursday and Saturday, where the Golden Knights will be looking to win their first-ever game in Minnesota.