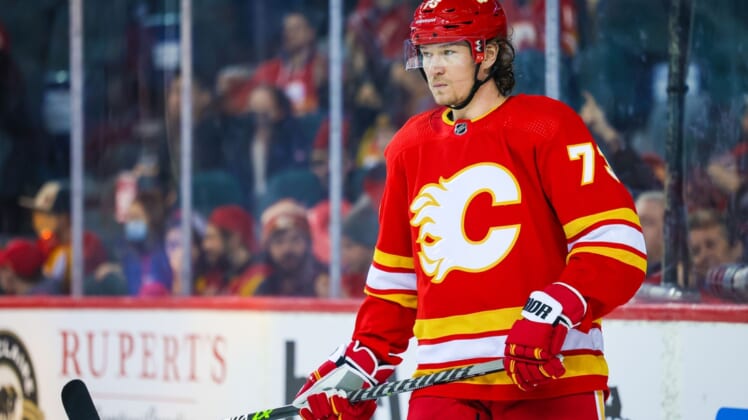 Tyler Toffoli has quickly paid dividends for the Calgary Flames since they acquired the forward in a trade with the Montreal Canadiens last month.

Toffoli will face his former team for the first time since the trade when the Flames host the Canadiens on Thursday night.

Toffoli was traded on Feb. 14 in exchange for forward Tyler Pitlick, prospect Emil Heineman, a 2022 first-round draft pick, and a 2023 fifth-round pick.

Since his arrival, Toffoli has produced five goals and two assists in seven games.

In the past two games, Toffoli has three goals and two assists to help Calgary win both and restart another winning streak. The Flames won 10 straight before a 7-1 loss to the Vancouver Canucks on Feb. 24.

The Flames are counting on Toffoli’s playoff experience to help them march toward a possible Stanley Cup title. He won a championship with the Los Angeles Kings in 2014, and helped the Canadiens reach the Finals last season.

He likes what he’s experienced so far.

“It’s definitely one of the closer groups that I’ve ever been a part of, and it’s only been seven days or 10 days or whatever it’s been,” Toffoli said after a 7-3 win against the Minnesota Wild on Saturday. “It’s been fun. Winning is fun, so hopefully we can just keep doing that.”

The Flames beat the Wild again on Tuesday by a 5-1 count.

Montreal was riding a five-game winning streak before losing 8-4 to the Winnipeg Jets on Tuesday.

There was plenty of optimism after the Canadiens rallied from an early 4-0 deficit to tie the score, but the game slipped back out of reach and Montreal became the first team in NHL history to rally from a four-goal deficit only to lose by four.

Montreal coach Martin St. Louis, who was hired on Feb. 9 despite having no formal experience as an NHL coach, other than a season as a power-play consultant for the Columbus Blue Jackets, had to manage his way through six power plays and six penalty-kill situations against the Jets.

“I think we’re a really good team when we can play with a little more flow,” St. Louis said. “Obviously, I haven’t coached a lot at this level, but it was a hard one (Tuesday) night with all the different scenarios.”

The Canadiens have a few players who are capable of filling Toffoli’s void.

Brendan Gallagher is a prime candidate, but the two-time 30-goal scorer has been stuck on four goals the past 17 games.

“You try to remind yourself that you’ve always been a results guy when the chances are there, but the last five or six games, I felt I’ve had at least one opportunity to put the puck in the net,” he said. “For whatever reason, I’m just not beating goalies.”

The Flames’ Matthew Tkachuk has been just as hot as Toffoli.

Tkachuk has scored five points (three goals, two assists) in his past two games, and 16 points (seven goals, nine assists) in the past 10 games.