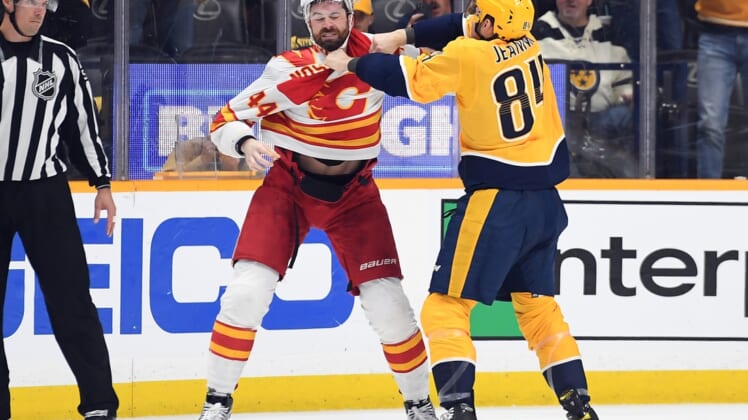 Elias Lindholm scored the overtime winner and Dillon Dube tallied twice as the Calgary Flames collected a franchise-record 25th road victory with a 5-4 win over the Nashville Predators on Tuesday.

Filip Forsberg scored twice, Matt Duchene scored once in a three-point game and Roman Josi collected one goal and one assist for the Predators (44-29-8, 95 points), who could have clinched a playoff spot with a regulation win. Mikael Granlund contributed three assists.

After his team’s late comeback, Lindholm completed a wild game with a top-corner wrist shot at 2:01 of the extra period, his 41st of the season. Rittich got a piece of the puck, but it trickled over the line. Rasmus Andersson and Johnny Gaudreau collected their second assists of the game on the winner.

With there being a distinct possibility the Predators and Flames will meet in the opening round of the Stanley Cup playoffs, tensions were high in an entertaining game.

Dube’s power-play goal on Calgary’s first shot opened the scoring at the 4:02 mark of the first period, a top-shelf offering, but the Predators replied with a pair of second-period goals.

Josi tied the game at 5:41 of the second with his 22nd goal of the season, and Duchene put the hosts ahead at 8:08 with his 42nd tally. Josi’s assist gave him 93 points, making him the eighth defenseman in NHL history to record at least 93 points in a season and the first since Phil Housley in 1992-93.

However, Dube lit the lamp again — his 18th of the season and eighth tally in seven outings — at 13:14 of the second period to even the count, which started a trend.

Forsberg scored 30 seconds into the third period, but Hanifin replied 93 seconds later with a seeing-eye point shot for his 10th goal of the season.

Forsberg’s second power-play goal of the period at 9:35 of the third period, his 42nd of the season, put the Predators ahead again a third time, but Tkachuk buried a puck just before the third-period horn for his 41st of the season to force overtime.