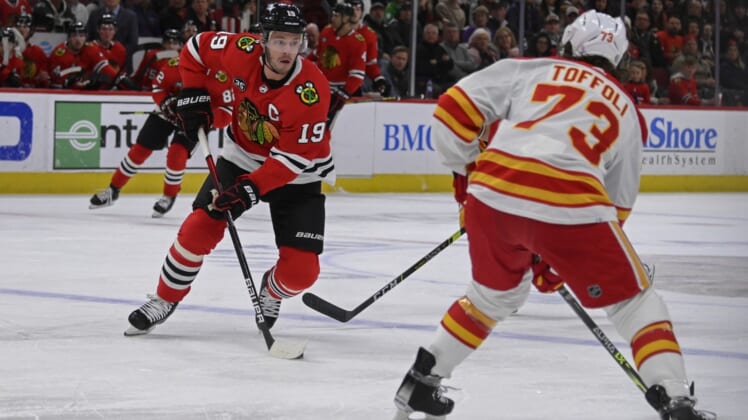 Johnny Gaudreau scored twice, including the game-sealing empty-netter, and Blake Coleman and Oliver Kylington each had a goal and an assist to lift the visiting Calgary Flames to a 5-2 victory against the Chicago Blackhawks on Monday night.

Calgary (47-20-9, 103 points) won for the seventh time in eight games to extend its lead atop the Pacific Division. The Flames jumped ahead of the idle St. Louis Blues to take possession of second place in the Western Conference.

Chicago (25-40-11, 61 points) was outshot 35-24 but stiffened after a sluggish start, killing three penalties while challenging Flames goaltender Jacob Markstrom down the stretch.

Alec Regula scored his first career goal at 12:54 of the second period to bring the Blackhawks to within 3-2, but Chicago was unable to get closer. The Flames scored a pair of empty-net goals in the final 1:32.

A 3-1, first-period surge provided Calgary with early control. Dillon Dube opened the scoring just 22 seconds into the game, redirecting a shot off an offensive-zone faceoff past Chicago goaltender Kevin Lankinen.

Gaudreau made it 2-0 Flames 6:01 later, stickhandling around the zone before beating Lankinen with a wrist shot from the left circle. The goal marked Gaudreau’s 600th career point.

The Blackhawks drew to within a goal 43 seconds after that, as Tyler Johnson corralled a rebound in front of the net and sent the puck past Markstrom.

It was Johnson’s first goal since Oct. 24 after he missed more than four months of the season with a neck injury.

Coleman netted what stood up as the game-winner at 14:41 of the first, redirecting a shot from the point into the net.

The Flames outscored the Blackhawks 15-5 to sweep the three-game season series. Calgary has won 10 of its past 12 games against Chicago and boasts a six-game winning streak at United Center.

Chicago’s MacKenzie Entwistle suffered a right shoulder injury in the first period and did not return. Jonathan Toews later went to the locker room after being hit in the face, but was back in the lineup after receiving stitches.