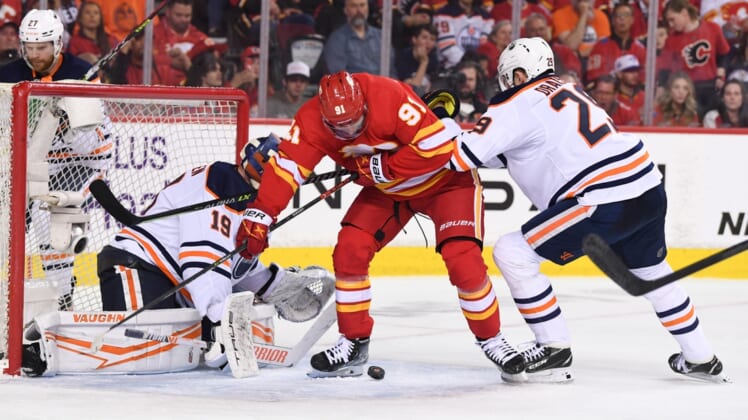 The host Calgary Flames set a NHL playoff record with two goals 51 seconds into the game and eventually claimed a 9-6 victory over the Edmonton Oilers on Wednesday to open their Western Conference second-round series.

After the Flames blew a four-goal lead, Rasmus Andersson broke a 6-6 tie three minutes into the third period with a wrist shot from the right face-off dot for the winning goal to cap a three-point game

Matthew Tkachuk’s second goal of the game at 8:55 of the third period, a breakaway tally, provided the insurance tally, and he netted an empty netter to complete his first career playoff hat trick and finish the highest scoring playoff game in Battle of Alberta history.

Lindholm opened the scoring 26 seconds into the clash when he found the mark from the top of the left circle, and then Mangiapane buried a chance from the slot at the 51-second mark, eclipsing the record of 54 seconds held by the 1993 Pittsburgh Penguins.

Ritchie’s goal at the 6:05 mark chased Smith, and McDavid put the Oilers on the board at 7:41 of the opening frame.

Coleman scored his first of the night 45 seconds into the second period — the first time in franchise history the Flames have scored in the opening minute of the first two periods in a playoff game — and then made it 5-1 with a deflection at 6:10 of the frame.

Bouchard replied exactly one minute later, but Tkachuk’s power-play goal at 8:24 of the middle stanza made it 6-2, and the Flames appeared free and clear.

The Oilers roared back. Hyman netted his first of the game before the midway point of the second period and then made it 6-4 a few minutes later with a rebound tally.

Draisaitl scored with 38.1 seconds remaining in the second period, and then Yamamoto’s rebound tally 88 seconds into the third period evened the score 6-6.