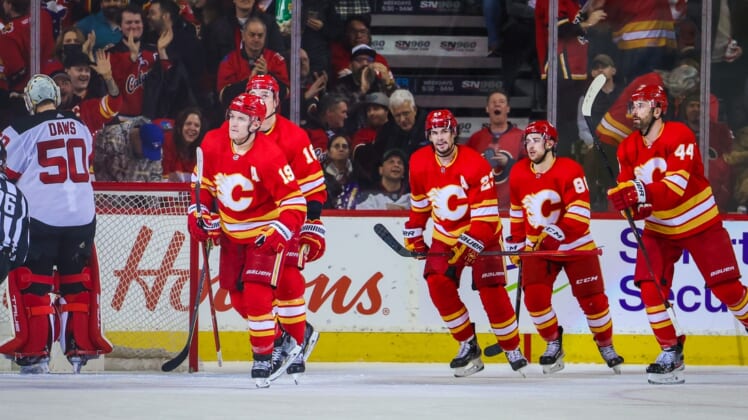 Matthew Tkachuk had a goal and two assists as the Calgary Flames earned a 6-3 win over the visiting New Jersey Devils on Wednesday.

The victory extends Calgary’s lead in the Pacific Division to seven points over the second-place Los Angeles Kings.

Dillon Dube had a goal and an assist for Calgary. Brett Ritchie, Andrew Mangiapane, Johnny Gaudreau and Milan Lucic scored the Flames’ other goals, and Jacob Markstrom stopped 30 of 33 shots to improve to 29-11-6 of the season.

While the Flames have been dominant on home ice, the Devils are 8-20-2 in away games this season. New Jersey has the fewest road points (18) of any team.

The Devils controlled much of the play in the opening 10 minutes, but Ritchie’s first goal of the season put Calgary ahead at 9:43 of the first period.

Though New Jersey twice tied the score, the Flames responded with quick strikes to re-establish their lead.

Mercer’s goal at 16:21 of the first period was answered by Mangiapane two minutes later. In the second period, it took Dube just over two minutes to put Calgary back ahead after Subban had again equalized for the Devils.

Dube’s tally was the first of three goals within a four-minute span for the Flames, as Tkachuk and Lucic extended Calgary’s lead in rapid fashion.

The flurry chased Devils goaltender Nico Daws early for the second straight night, as Daws was removed after allowing four goals on 19 shots in 29:31. It was almost a carbon copy of his struggles on Tuesday in a 6-3 road loss to the Vancouver Canucks, when Daws lasted 28:51 and surrendered four goals on 21 shots.

Jon Gillies stopped 19 of 20 shots in relief of Daws.