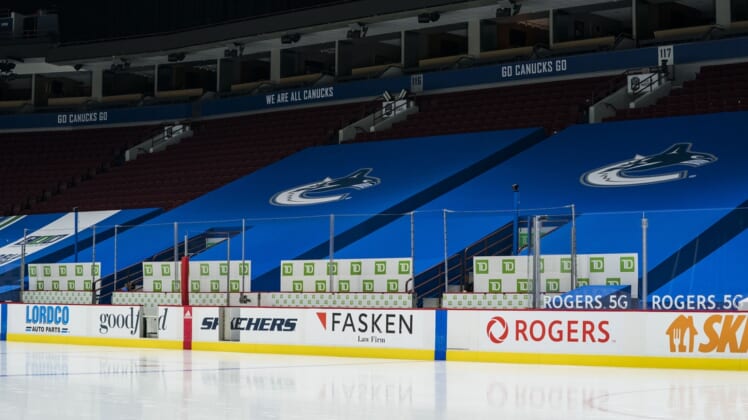 Mar 31, 2021; Vancouver, British Columbia, CAN; A general view of an empty Rogers Arena after the game between the Calgary Flames and Vancouver Canucks scheduled for Wednesday was postponed due to COVID-19. Mandatory Credit: Bob Frid-USA TODAY Sports

The NHL announced Friday that COVID-19 concerns have further disrupted the league’s schedule and has sidelined three teams through Christmas due to recent outbreaks.

In addition to the Calgary Flames’ current pause being extended through Dec. 26, after the NHL’s scheduled holiday break, the league postponed games for the Colorado Avalanche and Florida Panthers as well. The decision was made by the NHL and NHL Players’ Association medical groups.

Nearly 150 NHL players have been on the protocol list so far this season, and the list has been growing rapidly in recent days.

“A decision on when each team’s training facilities will re-open will be made by the League and the NHLPA in the coming days,” the NHL said in a statement.

The league is reviewing and revising all three teams’ regular season schedules.

The Avalanche’s upcoming postponed games include: Saturday vs. Tampa Bay, Monday at Detroit, Wednesday at Buffalo and Thursday at Boston.

The Panthers’ upcoming postponed games include: Saturday at Minnesota, Tuesday at Chicago and Thursday vs. Nashville.

“The Flames, Avalanche and Panthers organizations have followed, and will continue to follow, all recommended guidelines aimed at protecting the health and safety of their players, staff and community at large as set by the NHL, local, state/provincial and federal agencies,” the NHL said.