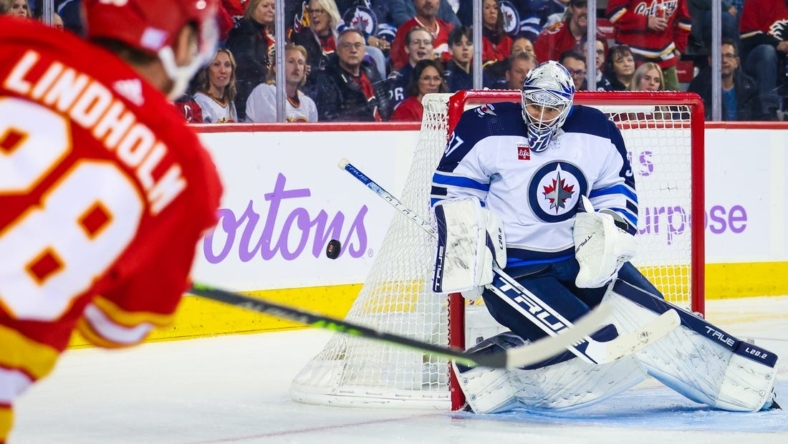 Elias Lindholm and Adam Ruzicka each had a goal and an assist, and the Calgary Flames snapped their seven-game winless streak with a 3-2 victory over the visiting Winnipeg Jets.

Trevor Lewis also scored and Jacob Markstrom made 21 saves for the Flames, who were 0-5-2 in their past seven games. Rasmus Andersson had two assists.

Pierre-Luc Dubois scored a goal in his fourth straight game for the Jets, who were 6-0-1 in their past seven games. Neal Pionk also scored, while Connor Hellebuyck made 32 saves.

Both teams went 0-for-3 on the power play, although Calgary netted a shorthanded goal.

The Flames took a 1-0 lead at 3:23 of the first period when Ruzicka sent a backhander toward the left from the right circle and Lindholm deflected it past Hellebuyck.

Winnipeg tied it at 14:46. Josh Morrissey controlled a Calgary turnover and passed to Pionk, whose shot from the top of the right circle deflected off the Flames’ Connor Mackey and past Markstrom.

Ruzicka made it 2-1 when he converted a pass from Lindholm on a 2-on-1 rush at 17:22. The play started when Andersson sent a long outlet pass to Lindholm at center ice, and Lindholm got around a defender to set up the 2-on-1 that Ruzicka finished off.

Dubois finished off a pretty passing sequence to tie the score 2-2 at 4:23 of the second period. Pionk had the puck at the center point and fed Morrissey in the left circle, and he quickly passed across the slot to Dubois.

Calgary regained the lead with a shorthanded goal at 18:31. Mikael Backlund entered the Winnipeg zone 2-on-1 and passed to Trevor Lewis, who deked and slid a backhander past Hellebuyck.

Winnipeg pulled Hellebucyk with about two minutes remaining in regulation but was unable to generate any sustained pressure on Markstrom as time ran down.