Flames look to return to form against Coyotes 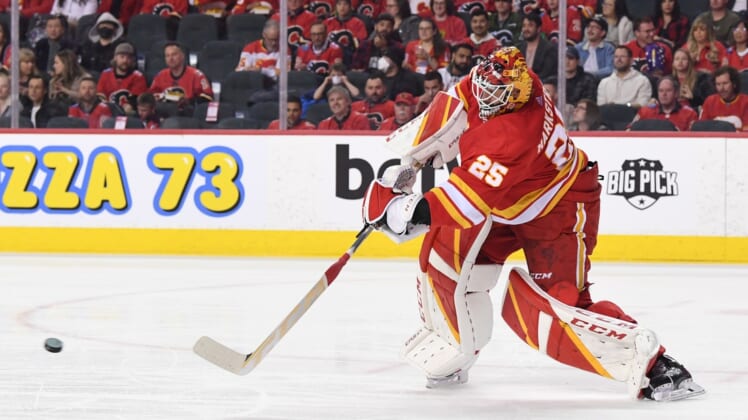 The Calgary Flames will have extra motivation when they host the cellar-dwelling Arizona Coyotes on Friday.

The Pacific Division-leading Flames kicked off a six-game homestand with a disappointing 4-3 loss to the San Jose Sharks on Tuesday — a game in which they blew a 3-1 lead and surrendered a pair of third-period goals 28 seconds apart. The Flames lost in regulation when leading after two periods for the first time this season (31-1-2).

There doesn’t appear to be much chance of the Flames looking past a Coyotes team that has dropped three straight games in regulation and will be among the favorites to win the lottery for the top pick in this summer’s NHL draft.

The defeat at the hands of a Sharks team that is all but eliminated from playoff contention was an abysmal defensive performance, with everybody — including goaltender Jacob Markstrom — accepting and deserving blame.

“Four goals against at home. I thought we kept the chances down,” Markstrom said. “You’ve gotta stop all four. That wasn’t good. I’ve gotta be better.”

The Flames are the league’s No. 2 team defensively but looked nothing like it against the Sharks.

“No excuse,” forward Matthew Tkachuk said. “(Markstrom) has been our MVP this year and we did a terrible job, in the third especially, in front of him.”

Friday’s clash likely will be the debut of center Ryan Carpenter, the veteran acquired from the Chicago Blackhawks at the trade deadline. Carpenter skated on the fourth line during Thursday’s practice, with Sean Monahan appearing the odd-man out in what’s been a dreadful season for the seven-time 20-goal scorer.

Speaking of teams coming off frustrating defeats, the Coyotes begin a three-game Western Canada swing after Tuesday’s 4-2 home defeat at the hands of the Seattle Kraken. As much as the Coyotes know they are at the depths of yet another rebuild, everybody admitted their performance against Seattle was not up to snuff.

“I saw a lack of fight, I saw a lack of soul a little bit,” coach Andre Tourigny said. “We have a lot of frustration for whatever reason. We just have to regroup and push all together.”

It’s been a disappointing turn for Arizona, which won four of five games on a road swing before this losing skid.

“It’s tough to put a finger on what’s changed since the road trip,” Tourigny said. “You can feel it, you can see it. How to get out of it is the million-dollar question. That’s what we need to find a solution for.”

There are some positive notes for the Coyotes. Forwards Nick Schmaltz, Nick Ritchie and Clayton Keller are rolling offensively. Schmaltz, whose next goal will be his 20th of the season, has collected 18 points (eight goals, 10 assists) in 10 March games, while Keller has netted 16 points (six goals, 10 assists) in the past 10 outings and Ritchie has scored five goals in his past eight outings.

Despite those personal achievements, the Coyotes are well aware bigger goals are more important, even for a team that will be playing out the string.

“I think for our team and what we’re trying to do here, I don’t think that’s the best effort we can put out there,” said veteran defenseman Shayne Gostisbehere.

Of note, Coyotes forward Phil Kessel is slated to play his 964th consecutive game, which would tie him with Doug Jarvis for the second longest streak in NHL history. Kessel is also two goals shy of reaching 400 for his career.