Flames look to hold off Kings in Pacific Division race 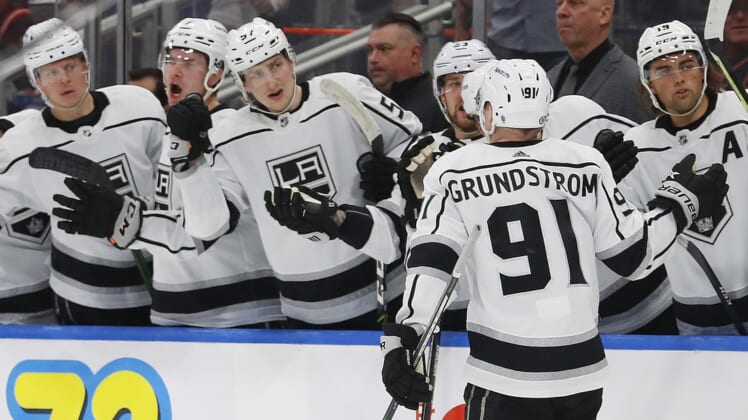 The Calgary Flames can’t clinch a playoff spot or even nail down the Pacific Division title, but they can make a big statement as they play two of their next three outings against the Los Angeles Kings.

The first-place Flames boast a six-point edge and have three games in hand on the second-place Kings entering the teams’ Thursday matchup in Calgary. The Kings and Flames will meet again Monday in Southern California.

“They’re huge games,” Flames defenseman Erik Gudbranson said. “You win those games, you push yourselves up and you push them down, and it goes the other way around, they’re four-point swings, really. So they’re massive, massive games. … This is a huge week for us.”

The Flames are coming off a 2-1 home loss to the league-leading Colorado Avalanche on Tuesday, leaving Calgary with a middling 4-3-1 record in the past eight games.

Calgary boasts one of the league’s top lines with the trio of Johnny Gaudreau, Matthew Tkachuk and Elias Lindholm, but part of the team’s struggles has been a lack of scoring depth.

Blake Coleman has not scored in eight games. Andrew Mangiapane — who has 30 markers on the season — has just one in 13 outings. Tyler Toffoli snapped a seven-game slump with his goal against Colorado, and Calle Jarnkrok, a key player acquired before the trade deadline, hasn’t scored in his half-dozen games since joining the team.

The Kings arrive looking to rebound after taking a 4-3 shootout loss Wednesday in Edmonton. Los Angeles erased a two-goal deficit with a pair of second-period goals 14 seconds apart to force extra time, but Oilers stars Leon Draisaitl and Connor McDavid (who both scored in regulation) put Edmonton over the top in the shootout.

“Those two goals were huge earning this point, but we wanted two (points),” said forward Quinton Byfield, who scored the Kings’ second goal. “It showed that we won’t back down. We’re down 3-1 and came back there, it shows our resilience. We played pretty hard. It’s just next time we’ve got to get the job done.”

Los Angeles has one win in its past four outings (1-1-2) and just four victories in 11 games (4-4-3). A big reason for those struggles is the lengthy list of injured players on the shelf, among them defensemen Matt Roy and Drew Doughty and forwards Dustin Brown, Andreas Athanasiou, Brendan Lemieux and Blake Lizotte.

Despite the loaded injury list, and the fact that defenseman Alexander Edler is not quite 100 percent from the leg injury that earlier sidelined him for 36 games, the Kings put up a fight against an Oilers team that has won eight straight home outings.

“Our guys did a good job,” Kings coach Todd McLellan said. “They were prepared for it. It’s going to be that way until the end of the season. Our group, the group that we have playing right now, did a real good job (Wednesday).

“We had to scratch and claw to come back, it’s disappointing we didn’t get the point when the second game started, the shootout game. As far as the 60 minutes, finding guys to contribute, I thought we did a real good job.”