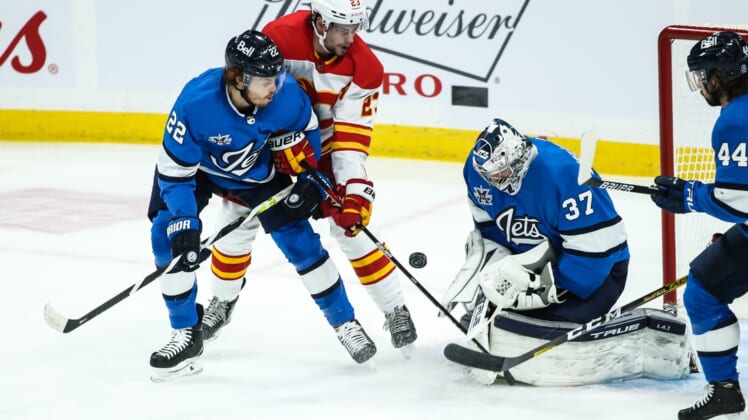 The Calgary Flames and Winnipeg Jets will be hard-pressed to top the drama they produced Monday when they face off again Tuesday in Manitoba.

The Jets jumped out to a two-goal lead, but the Flames rallied thanks in part to a fluky goal from the far blueline. After Calgary went on top 3-2, Winnipeg got a late game-tying goal to force overtime before the Flames prevailed in a shootout for a 4-3 victory.

The question is whether the Monday result means the glass is half-full or half-empty for Winnipeg.

“A point’s a point,” said Jets forward Kyle Connor, who scored two power-play goals in the first period Monday. “We came out good, hopped out to a two-goal lead and knew they were going to push back, and they did. It was a roller coaster.”

Winnipeg forward Mark Scheifele said of the game, “That’s hockey. The hardest lead to hold in hockey is two, so we gotta be better, stick to our game. We can’t sit back. We gotta keep on being aggressive, aggressive. We’ll learn from it and we’ll get right back at it (Tuesday).”

Although the Jets ended up on the wrong side of the final score, they can take consolation in their power play lighting the lamp a couple of times. Having traded away top sniper Patrik Laine (Pierre-Luc Dubois, whom the Jets received in the trade, is a week away from making his debut due to COVID-19 quarantine regulations), Winnipeg had to make changes to its man-advantage attack. Scoring twice was a big step forward.

“It always, when you get something new, takes time,” Winnipeg coach Paul Maurice said. “It looks like it’s finding its own rhythm beyond structure.”

The Flames have won two straight, but they know their game isn’t perfect. They caught a break when Chris Tanev’s shot from more than 120 feet away somehow beat Jets goaltender Connor Hellebuyck to cue the comeback.

“We were a little slow coming out in the first period,” Calgary coach Geoff Ward said. “Obviously, they cashed (in) on their power plays, but I felt like our legs weren’t going, probably due to the travel day.

“They say after an emotional game like the one we had in Montreal (a 2-0 win Saturday), the next one is hard to get into. I thought it took awhile to get into it, but I give the guys a lot of credit for how they regrouped and turned things around to get the win.”

Flames forward Johnny Gaudreau, who struggled last season, has been a driving force to start this campaign. He scored in regulation Tuesday, then netted the shootout winner. He has collected at least one point in every game this season, notching six goals and four assists in eight outings.

“Johnny’s a little guy, but he’s pretty good,” quipped teammate Andrew Mangiapane, who isn’t much bigger than Gaudreau. “Every time he gets the puck, he’s making things happen. That’s what we need.”

Gaudreau said, “I still think I’ve got more in the tank and can push a little harder. Me and (Sean Monahan) feel really comfortable together, playing together, but we have more we can push forward with and try to create some really good things with our line there.

“Whoever’s playing with us, we feel really good about our game right now, but we know we have a little more to give and we’re excited to do that.”